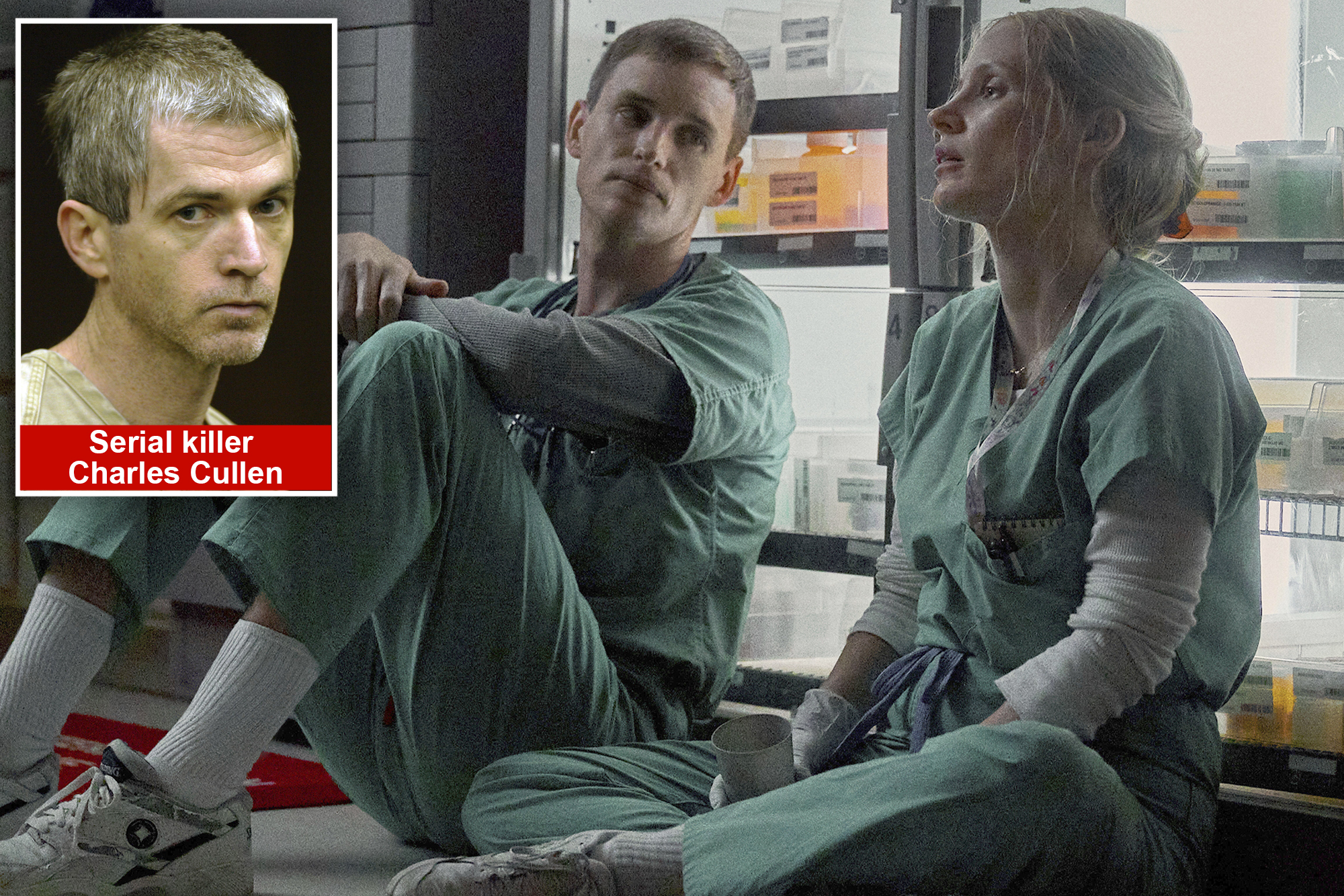 There’s a thin line between good and evil.

But for most of 2003, that line was nearly nonexistent between New Jersey critical care nurses Charles Cullen and Amy Loughren. The two were inseparable.

In between tending to patients, the duo would share late-night snacks and swap war stories about tough heartbreaks — including Cullen’s divorce from ex-wife, Adrienne Taub, with whom he had two daughters. The more time spent together, the closer the platonic pals grew.

Cullen, now 62, is believed to have killed as many as 400 innocent patients during his 16-year work as a critical care nurse at hospitals in New Jersey and Pennsylvania.

That is, until one day in November 2003, when Loughren learned that Cullen had been murdering patients with deadly doses of insulin and digoxin — a cardiac medication used to treat irregular heartbeats. (The drug has since been noted as Cullen’s preferred weapon of choice.)

Somerset County Detectives Tim Braun and Danny Baldwin presented Loughren with official records of Cullen’s suspicious drug withdrawals from the hospital’s dispensary. The evidence was enough for Loughren, now 57, to agree to help the authorities bring him to justice.

Her vigilante heroism is the subject of the new film “The Good Nurse.” Oscar winners Eddie Redmayne, 40, and Jessica Chastain, 45, star as Cullen and Loughren in the movie, which premiered in select theaters Oct. 19, and is set to debut on Netflix Wednesday. It’s an adaptation of Charles Graeber’s 2013 book of the same title.

Redmayne, as Cullen, and Chastain, as Loughren, retell the story of Cullen’s killing spree and subsequent arrest in “The Good Nurse.”JoJo Whilden/Netflix/THA / Avalo

The thriller, directed by Academy Award nominee Tobias Lindholm, of 2016’s “A War” fame, invites audiences to pull up a seat next to a visibly nervous Loughren as she sits in a booth at a bar in Bridgewater, NJ, wearing a police wire. She agreed to help tease out a recorded confession from an unsuspecting Cullen. The pair met over bites on a chilly December afternoon.

At the time, Cullen had recently been fired from Somerset Medical Center for lying on his job application. He was also under suspicion for several inexplicable deaths.

“Hey,” says a quivering Loughren in a clip of the film. She anxiously bites her nails as Cullen enters the eatery and joins her in the booth. “Work has been pretty awful without you there,” she tells him with a forced smile. “You and I were partners.”

But the unimposing Cullen doesn’t want to talk about work.

“Is it because what they’re saying is true?” Loughren mutters.

Initially, she didn’t want to believe rumors of Cullen’s involvement in the sudden deaths of folks in their care.

One of his first kills at Somerset Medical, in June 2003, was Catholic priest Florian Gall, 68. The reverend died unexpectedly while recovering from pneumonia.

The hospital discovered high levels of digoxin in his blood. And the incident was reported to the then-director of New Jersey Poison Control Center, Steven Marcus. In a 2013 interview with “60 Minutes,” Marcus, who has since retired, said the amount of the drug in Gall’s blood was “astronomical.” Gall’s death was the second unexplained overdose at the hospital in two weeks.

The fatality spurred the investigation into what was revealed to be a 16-year murder spree by Cullen.

Cullen killed at least 13 patients at Somerset Medical Center between 2002 and 2003. NY Post

A native of West Orange and the youngest of eight kids, Cullen’s father died when he was just 7-months old. Then at 17, his beloved mother died in a car accident. He married Taub in June 1987 and they quickly welcomed their two kids. But because of his drinking and odd behavior, including his alleged abuse of her Yorkie, the pair split.

He began his murderous binge with the death of Judge John Yengo at Saint Barnabas Hospital in Livingston, NJ, in 1988, a year after graduating from Mountainside Hospital School of Nursing.

The jurist, 72, was being treated for severe sunburn. Postmortem, officials discovered that his saline IV had been contaminated with a toxic injection of lidocaine, a heart medicine.

In March 1993, he was arrested on felony charges for stalking female nurse Michelle Tomlinson after breaking into her home in Pennsylvania. He plead guilty to misdemeanor trespassing and was sentenced to a year of probation. He took a two-month sabbatical from work to undergo psychiatric treatment.

But in August of that year, while working as a nurse at Warren Hospital in Phillipsburg, NJ, Cullen was investigated for the murder of 91-year-old Helen Dean.

Despite losing several hospital jobs under suspicion of high crimes, Cullen’s misconduct was never reported to his successive employers.

The nonagenarian was recovering from breast cancer surgery and was preparing to be discharged when she suddenly died of heart failure.

Cullen avoided prosecution, owing to a marred autopsy report. And despite high suspicions of his wrongdoing with digoxin, the hospital didn’t fire him. Instead, he voluntarily stepped down from his post in December.

By April 2002, he had obtained and lost half a dozen nursing positions, three of which he’d been forced out of for condemnable offenses, including stealing drugs from St. Luke’s University Hospital in Bethlehem, Pennsylvania.

Rather than fire him, the facility allowed Cullen to quietly resign.

The string of curious patient deaths continued as he moved from job to job. But neither his work performance nor the causes of his dismissals were ever communicated from one hospital to the next. No complaints about his competence, interactions with patients or issues with potentially lethal drugs were reported to medical licensing boards in New Jersey.

Thomas Strenko holds a picture of his late son, Michael, who was Cullen’s youngest victim.Felix Bryant

He’d leave each facility before administrators or police investigators could nail him. The lack of checks and balances seemed to enable his homicidal rampage.

Cullen’s departure from St. Luke’s led him to Somerset Medical, where Loughren ultimately discovered his sins.

He partially admitted his crimes to Loughren during their taped restaurant meeting and was immediately placed under arrest.

But, once he was in police custody, Cullen refused to talk. So, Braun and Baldwin tapped Loughren, again, for help getting a full confession out of the guy. And, she did.

Loughren falsely told Cullen that law enforcers were eyeing her as a suspect in the murders at Somerset Medical Center. From there, he gave a formal confession to the detectives.

He admitted to killing at least 13 patients at Somerset Medical Center. He’d often lace their saline IV bags with poisonous levels of meds.

It was a sick practice that he used to kill at least 30 victims, raging in age from 21 to 91, at seven different hospitals across New Jersey and Pennsylvania from the late 1980s until the early 2000s. Some believe Cullen, now 62, lethally injected as many as 400 people.

In March 2006, he was convicted of murdering 29 patients.

In court affidavits, Det. Baldwin said Cullen claimed that his motive for the killing was to “alleviate patient pain and suffering.” However, a number of Cullen’s victims weren’t gravely ill.

Cullen was ultimately sentenced to 11 consecutive life terms, or 397 years, in prison for the murders. He only narrowly avoided receiving the death penalty due to his willingness to cooperate with authorities and to help identify his victims.

He is in protective custody at New Jersey State Prison in Trenton.

In 2013, a stoic Cullen, clad in a khaki prison jumpsuit and seated behind a thick layer of glass, told “60 Minutes” that when he met with Loughren on that fateful afternoon in December 2003 he suspected that she was working with the cops.

But rather than bashing his former friend for aiding in his arrest, Cullen — who acknowledged that what he did was wrong and confessed that he might have never stopped but for being detained — insisted that his opinion on Loughren won’t change.

When the huskies pick up their take-out! ...
Elon Musk calls Gary Kasparov an 'idiot' and 'douche' over Ukraine