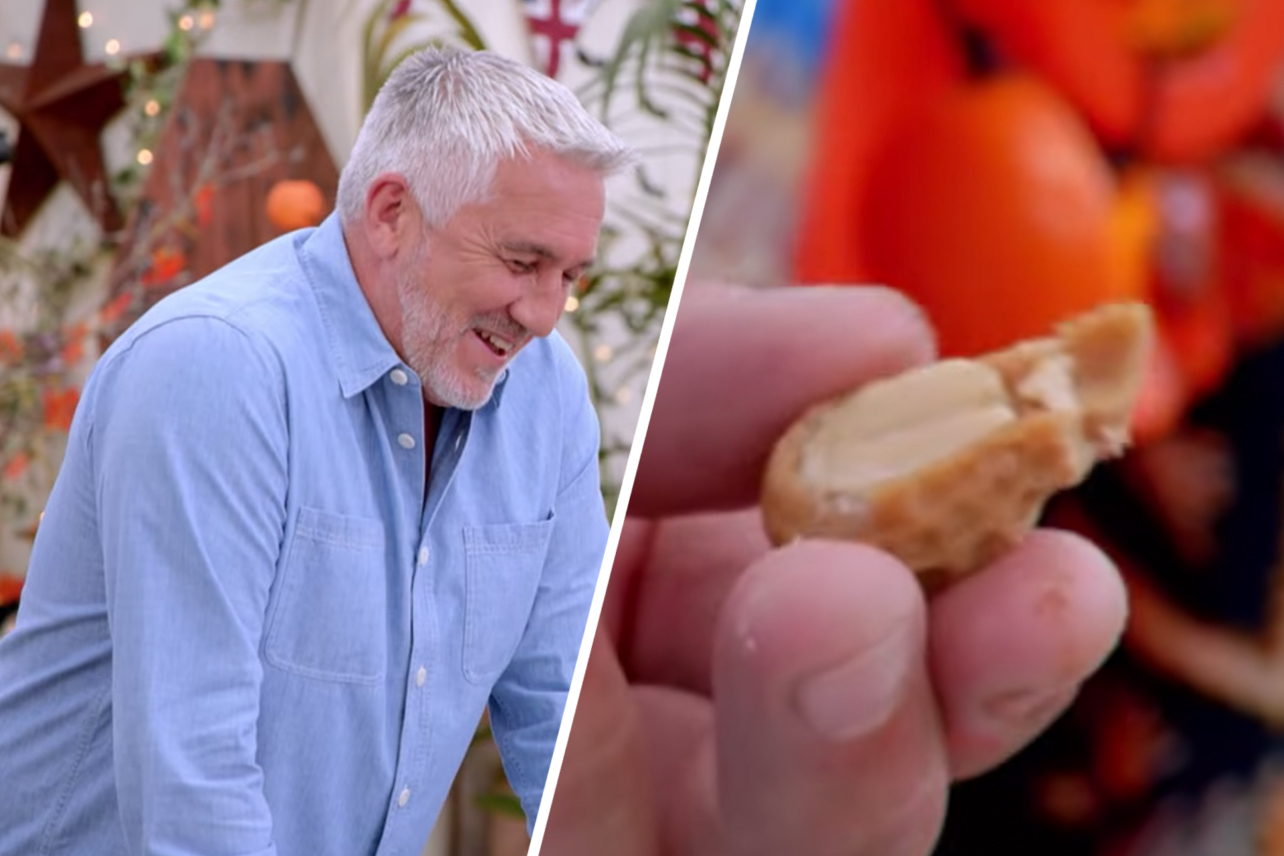 Puns are polarizing everywhere except in The Great British Baking Show tent. Ever since the cozy Netflix show’s early days, the judges, hosts, and bakers have loved a bit of NSFW wordplay. We’ve spent seasons past marveling at jokes about soggy bottoms, hot buns, chocolate starfishes, and Prue Leith explaining she uses “two holes” to “squirt.”

So it is that The Great British Baking Show tent was left in giddy hysterics during “Halloween Week” when Paul Hollywood complained about wanting “nuts sort of hanging out.” To his credit, Paul wasn’t trying to be cheeky. He was merely criticizing some lackluster peanut and butterscotch treats. It was only when the whole tent was laughing at him that Paul bashfully joined in.

Paul’s “nuts hanging out” faux pas is just the latest in a long line of puerile puns to pop up on The Great British Baking Show.

The inadvertently saucy moment happened towards the end of The Great British Baking Show “Halloween Week.” Scottish-born music teacher Kevin Flynn was presenting his “Arachna-FOMO” Showstopper to Paul and Prue for their judgement. The chocolate-covered sugar cookie? Good. The macarons? Too sweet and a bit crispy. His butterscotch-covered salted peanuts? “It’s just sweetness rather than flavor,” Paul complained. “And it needs to be finished properly. I think something with the nuts sort of hanging out.” The bakers lost it.

Is it, though? Okay, I mean, I guess she did cause a ruckus last season when she explained to George Aristidou and the other boys that she has a special method for filling chouxnuts: “Quite often, I need two holes so that I can squirt. You squeeze the bag…When you meet that little bit of resistance, usually it means it’s full.” But besides that, Prue is more apt to make a joke about swilling alcohol than she is prone to make a naughty comment.

No, this is just one of those pure Great British Baking Show moments where people accidentally walk into a NSFW pun. Keep in mind, old hosts Mel Giedroyc and Sue Perkins made a game of looking for every dirty pun they could sneak onto the squeaky clean show. In more recent seasons, these cheeky comments tend to be more organic. Hence their added hilarity.

Nevertheless, it was a sweet, silly moment in an otherwise uneven episode of The Great British Baking Show. Sure, Syabira Yusoff dazzled the judges and deservedly won Star Baker, but that s’mores Technical Challenge was a nightmare. Paul might have tortured us with digestive biscuit-based s’mores, but he gave us a much needed spark of levity with his nutty comment.

Although, I have to say, I thought the nuts looked just fine.