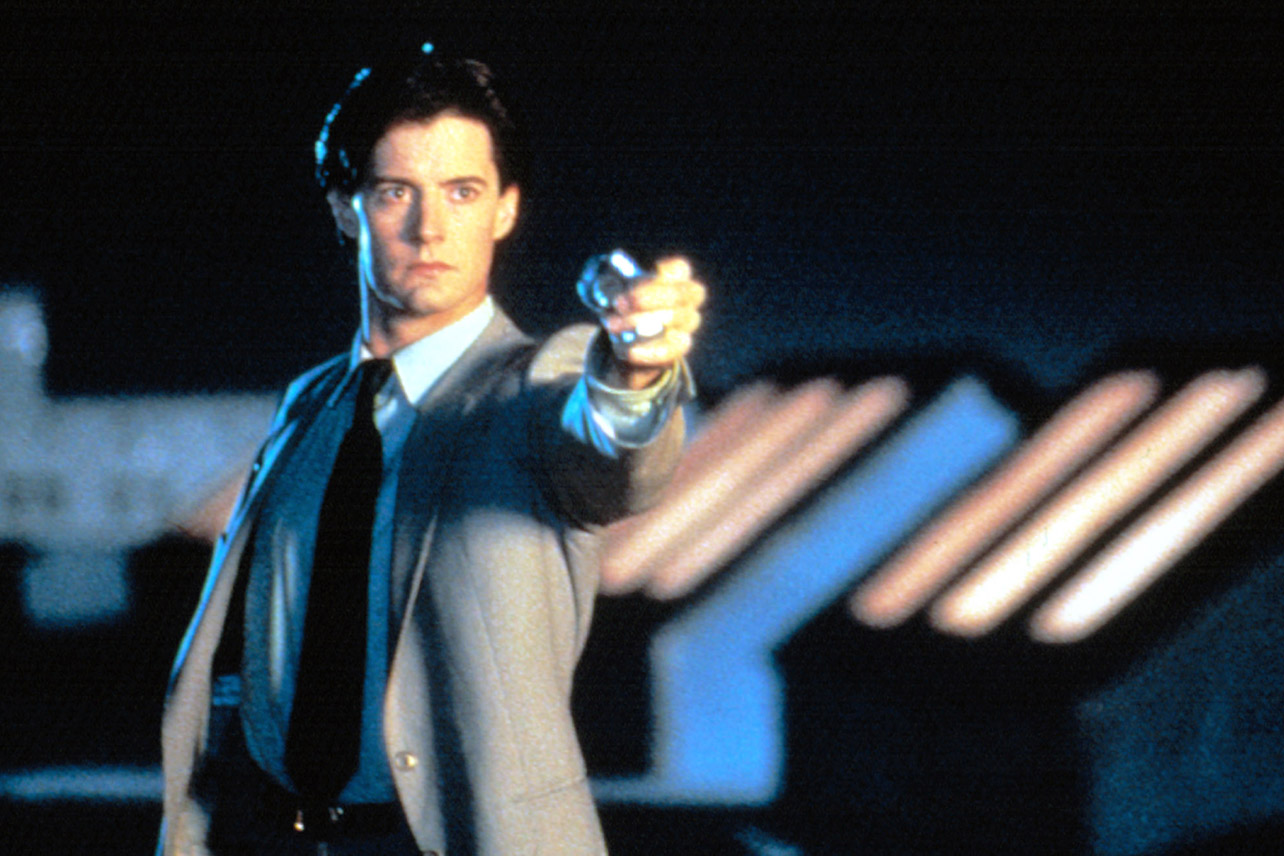 There is not an ounce of fat on Jack Sholder’s classic 1987 genre masterpiece The Hidden, a film buoyed by its performances that opens with an exceptional downtown LA car chase (that demolishes a 1978 Ferrari 308 GTS); boasts of a high concept sci-fi premise that makes it eternally contemporary; and also serves as a stealth audition for Kyle MacLachlan in landing his Agent Cooper role in Twin Peaks.

In The Hidden, MacLachlan plays FBI agent Lloyd Gallagher, visiting from the Seattle branch to Hollywood on the trail of a serial murderer who changes his identity so frequently, he’s been impossible to track. Grizzled homicide detective Beck (Michael Nouri) is assigned to help him, which he does only reluctantly. He’s the kind of cop who resents having his jurisdiction impinged upon; his authority questioned. There are stories about how Nouri and director Jack Sholder butted heads during the shoot – Sholder called him “insecure” and resented having to give him the lion’s share of attention so that MacLachlan was left largely on his own. For what it’s worth, MacLachlan didn’t need the help. Whatever friction there was behind the scenes translates on the screen as a man in Beck trying his best to do a good job, worries he’s failing and wanting desperately to be a hero in the eyes of his wife (Katherine Cannon) and young daughter Juliet (Kristen Clayton). He’s aggressive and unpleasant until the moment Gallagher tells him how his partner has been killed by the man he’s tracking; his wife and young daughter, too. “We’ll get him,” Beck says. All of his questions about why Gallagher is driving a Porsche and says he’s from a city no one’s ever heard of before answered when Gallagher asks him what Beck would do in his place. Not as a cop, but “as a man.”

The question carries with it a dual meaning and from here, if you’ve not seen the movie, you should remedy that immediately and come back for the rest.

When Gallagher specifies “as a man” in his question to Beck, he’s asking not as an appeal and a challenge to Beck’s masculinity, but because Gallagher may not be human himself. Gallagher claims he’s on the trail of a serial killer named Jack DeVries (Chris Mulkey), but Jack hasn’t had any kind of criminal record and was well-liked by his co-workers and neighbors before going on a two-week murder and larceny-spree culminating in The Hidden’s superior opening sequence. And, as it happens, in Jack’s mortal wounding. Beck tells Gallagher to celebrate but, panicked, Gallagher tells Beck that he is now hunting genial family man Jonathan Miller (William Boyet), the recipient of a recent triple-bypass and sufferer of acute gastritis who mysteriously checks himself out of the hospital, steals a Ferrari, and bludgeons to death a record store clerk for a boombox and his pockets full of hair metal and Concrete Blonde cassettes. Gallagher, it turns out, is hunting an alien that can pilot humans like the slugs in Robert Heinlein’s 1951 novel The Puppet Masters. It does this until its host is too damaged to continue and then it jumps to the next nearest, healthiest host. Jack to Jonathan, and then Jonathan to a stripper (Babylon 5‘s Claudia Christian) and then from her to… sufficed to say it makes catching the thing challenging. But then the thing decides it wants to increase the scope of its evil by possessing Senator Holt (John McCann) and declaring “his” ambitions to be the President of the United States. It sounds ridiculous, but The Hidden is so meticulously put together that all of it goes by so quickly, so smoothly, that it’s never anything but absolutely compelling: a crackerjack action vehicle packed with provocative ideas.

I owned the VHS of this film when I was a kid and I watched this movie over a hundred times in the last difficult years of high school. I can’t begin to express how much I love this movie. The Hidden nails is a certain mournful quality of a man who’s trying to be something he isn’t in order to fill a void in him he’ll never be able to completely fill. Sholder saw an opportunity in Jim Kouf’s (writing as “Bob Hunt”) standard action thriller script to fashion an existential piece curious about what it means to be human. Sholder transformed a shootout described in the screenplay as taking place in a shoe factory into a mannequin warehouse to highlight the film’s themes of hiding in human disguises and the related philosophical questions of the nature of the masks people wear at work versus the ones they wear at home or at play. I’m reminded immediately of a brief, throwaway sequence in Terminator 2 (1991) where the liquid terminator has a strange moment of recognition while contemplating a silver mannequin at a shopping mall; of a car crashing into a mannequin window display in Miracle Mile (1988); and from there back to the death of the replicant Zhora, breaking through a series of show windows in Blade Runner (1982). Comparisons to the “bug” concept in Men in Black are unavoidable; a scene where a cop runs out of bullets shooting the bad guy in a kitchen is lifted almost exactly by John Woo for his Hard Boiled (1992). There’s even an echo in a lesser-known Dean Koontz novella called “Hardshell” (1974) in its story of an alien cop in human disguise neutralizing another alien threat, complete with a surprisingly tender resolution.

Fans of genre fiction will find an unbelievable amount to unpack in The Hidden, from tracing its sources to following downriver to all the tributaries it has fed while itself remaining something of a “lost” film. Sholder’s filmography, as a whole, is due for a general reconsideration. He’s the director of the horror classic Alone in the Dark, wrangling Donald Pleasance and Jack Palance in a tale of one very bad night at a mental institution; of the sequel to A Nightmare on Elm St. that has a subtext crammed with queer awareness and pain; of massive reshoots for Walter Hill’s Supernova that resulted in a notorious boondoggle that I still find to be fascinating and vital; to a nasty, cult buddy cop flick Renegades starring Kiefer Sutherland, Lou Diamond Phillips and Jami Gertz.

Sholder is an underestimated director of action, it’s true, but when given the time and the resources, he’s also an unusually empathetic observer of human behavior. The Hidden is a superlative science fiction buddy cop picture, but it wouldn’t work without moments of levity as when Gallagher tries to eat an Alka-Seltzer tablet, is corrected, and then a scene later is shown dissolving aspirin in water. Nor without moments of real tenderness as when Gallagher holds eye contact with young Juliet at her bedtime as they communicate wordlessly (she of his loss, him of her recognition of him) in a way that will pay off in the most lovely way in the final moments of the film. Sholder also takes time to show Beck getting dropped off at home the morning after he’s been shot, his wife waiting for him in her robe at the front step and embracing him as he comes up the walk. Sholder is paying attention, and because his eye is so keen, we pay better attention to how the bad alien tips off his presence by licking his lips in an unusually purposeful way.

Beck’s gradual understanding of what’s happening is absolutely convincing. He’s a man of reason who comes to believe what’s absolutely impossible. Late in the film, as he’s getting Gallagher to help him, Beck takes a moment to ask if a friend who’s been possessed can be saved. It’s the right question, the empathetic question asked at the right time. Sholder even allows distant, strange Gallagher a moment to kneel before a fallen comrade and put his forehead against his friend’s hand: a hint right before the end that this other is perhaps not so emotionally strange as he might seem. I think The Hidden spoke to me, too — not unlike John Carpenter’s Starman (1984) — of neurodivergence and how our outward expressions of emotion can sometimes be difficult for the “normals” to process, but that doesn’t mean that the emotions are not as deeply felt. And as all this granular detail, this character work flowers, Sholder keeps the pedal pressed to the floor, the pace of its plot unspooling is relentless… and breathtaking. It’s the kind of movie, like Steve De Jarnatt’s Miracle Mile, that even people who love movies like this are shocked to have missed somehow and immediately incorporate as staples of their comfort movie diet. It’s not unlike its parasitic alien heroes in that way: transferring from one host to the next. It’s a classic looking for a larger audience, and its inclusion as part of The Criterion Channel’s “80s Horror” collection will hopefully help it find one. It deserves it.

Walter Chaw is the Senior Film Critic for filmfreakcentral.net. His book on the films of Walter Hill, with introduction by James Ellroy, is now available for pre-order. His monograph for the 1988 film MIRACLE MILE is available now.