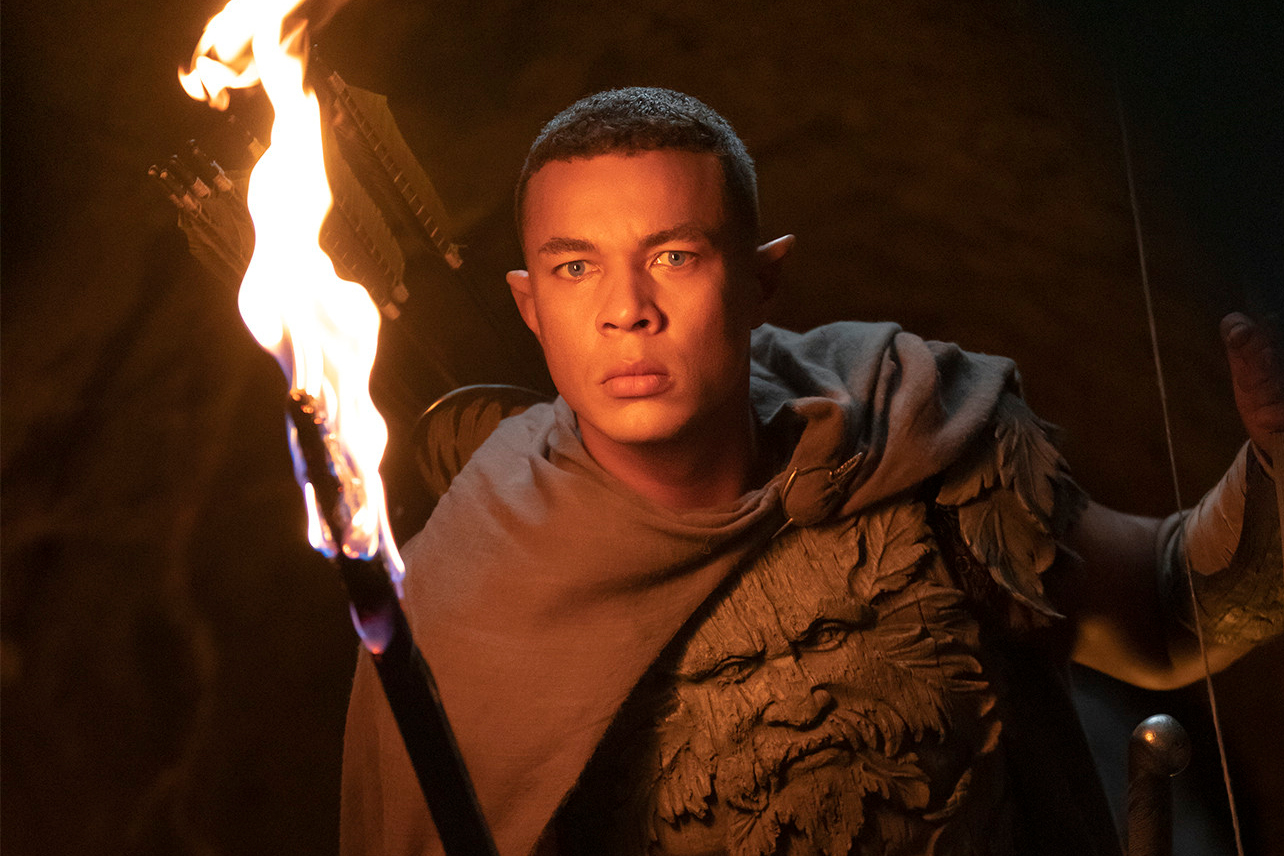 The Lord of the Rings: The Rings of Power Episode 3 “Adar” follows Galadriel and Halbrand as ship captain (and future hero) Elendil (Lloyd Owen) takes them to Númenor. Once a bastion of elvish support, the Númenoreans have turned their backs on their former elf allies, leaving Galadriel in a tricky position. With the help of Elendil, though, she learns that there are some Númenoreans who remain Faithful to the elves and that Sauron’s symbol is a map. Elsewhere, Halbrand tries to start a new life, but winds up in jail, where Galadriel confronts him about his past.

However the episode’s title refers to the mysterious figure who is leading the orcs in the Southlands. After being put to work by the orcs, Arondir (Ismael Cruz Córdova) hatches a daring plan with his fellow elvish captives to get away. The plan is a disaster and Arondir winds up being taken to Adar.

So who is Adar? What are we to make of Halbrand’s backstory? And why should Gandalf fans be hyped about the Stranger this week? Here’s The Lord of the Rings: The Rings of Power Episode 3 ending explained…

Photo: Prime Video
THE LORD OF THE RINGS: THE RINGS OF POWER EPISODE 3 ENDING EXPLAINED: WHO IS ADAR?

The final moments of The Lord of the Rings: The Rings of Power Episode 3 show Arondir desperately fighting off orcs and one nasty warg to try to help his former elven commander escape to seek help. It’s a fool’s mission, though. Arondir succeeds in helping his bro Revion (Simon Merrells) get away only for the orcs to shoot Revion down with arrows. Arondir is furious and manages to survive the warg. While the orcs want to kill Arondir, one says, “Bring him to Adar.” The episode ends on the blurry shot of what could be an orc…or a dark elf.

So who is Adar? Well, we don’t know yet. He’s obviously the one commanding the orcs taking over the Southlands, but could he be something more? Is he Sauron’s latest form? Or is he merely one of the underlings in Sauron’s thrall?

One thing is clear: he is being set up as The Lord of the Rings: The Rings of Power Season 1’s big baddie. I mean, he’s got an army of orcs, people!

Photos: Everett Collection, Prime Video
WHO IS THE STRANGER IN THE RINGS OF POWER? ALL THE CLUES IN EPISODE 3 “ADAR”:

We got a few more clues about the Stranger’s true identity in this week’s all-new episode of The Lord of the Rings: The Rings of Power. While Episode 2 showed a scarier side of the Stranger, Episode 3 illustrated his softer side. After the harfoots discover that Nori’s (Markella Kavenagh) been hiding this mysterious figure, the Brandyfoots’ future is put at peril. Harfoots stick to a strict nomadic pattern and harfoots that fall behind are basically considered dead. With Nori’s father’s ankle injury, it’s unclear if he can keep up with the caravan unless he’s in the front. But as punishment for hiding the Stranger, Nori and her family are exiled to the back. At first it seems hope is lost, but then the Stranger helps push the family cart. With his help, they might be able to “stick to the trail.”

Those “Stranger is Gandalf” truthers are probably psyched that the Stranger’s learned two words. “Nori” and “Friend.” He says “Friend” to Nori’s family when he reveals himself, which could be an Easter egg for when Gandalf puzzles over the “Speak ‘Friend’ and enter” riddle at the Mines of Moria. Also no fireflies died this week. So it’s looking more and more like this guy might be Gandalf, or a wizard of some sort.

Photo: Prime Video
IS HALBRAND SUPPOSED TO BE ARAGORN ON THE LORD OF THE RINGS: THE RINGS OF POWER? (OR IS HE SAURON??)

We learn in The Lord of the Rings: The Rings of Power Episode 3 that Halbrand hasn’t exactly been forthcoming about his past for good reason. It turns out that the sigil he wears as a necklace is the mark of the line of Southlands kings who sided with Mordor. Galadriel assumes that this means Halbrand is skirting away from taking his rightful place as a heroic king who can unite the men of Middle-earth against Sauron.

If this has you wondering, “Hey, is Halbrand supposed to be a younger version of Aragorn?”, that’s clearly intentional. Halbrand is NOT Aragorn. While Aragorn has a longer life span than most humans of Middle-Earth, he will not be born for a few thousand years, and is, in fact, a descendent of Maxim Baldry’s Isildur. Halbrand is merely being set up to evoke Aragorn in our minds.

Does this mean that Halbrand will save Middle-earth? Well, uh, we actually think there are a heck of a lot of clues pointing to the theory that Halbrand is Sauron! There’s his fixation with the forge, the way he smoothly deals with the politicians of Númenor, and how when asked what’s he’s called, he gives the non-answer of “Depends.” Though no one is calling him Annatar (yet), he is a giver of gifts. He gives Galadriel back her brother’s dagger and uses the ruse of a few round of drinks to trick guildsmen at the outdoor tavern. Of course, that plan goes awry when he’s forced into a fight where he immediately turns into a proverbial Terminator, going bananas on dudes.

There are some theories amongst Tolkien nerds that Sauron might have been a tiny bit contrite after his actions in the First Age. If so, this “Halbrand” version of Sauron, trying to build a new, non-violent life away from the temptations of Middle-earth…fits pretty darn well. Not to mention the irony that Gil-galad (Ben Walker) tells Elrond (Robert Aramayo) that Galadriel’s dogged pursuit of Sauron could lure him back. Galadriel is literally dead set on pushing Halbrand back to Middle-earth, into the heart of evil, and surrounded by opportunities to not start anew. But start the plan to rule Middle-earth again.

This is all just speculation after three episodes! And if Halbrand is a descendent of a Southlands king, per Galadriel’s theory, that could also mean he’s the eventual Witch-king of Angmar. (We’re going to meet the Ring-wraiths at some point, folks!) Either way, there’s a sorrowful sense of darkness about this man and there’s an anger that Aragorn never had. Just saying!

Sarah Ferguson calls the Queen 'the most incredible mother-in-law'
Battle Between Leopard & Wildebeest Mother over Calf ...