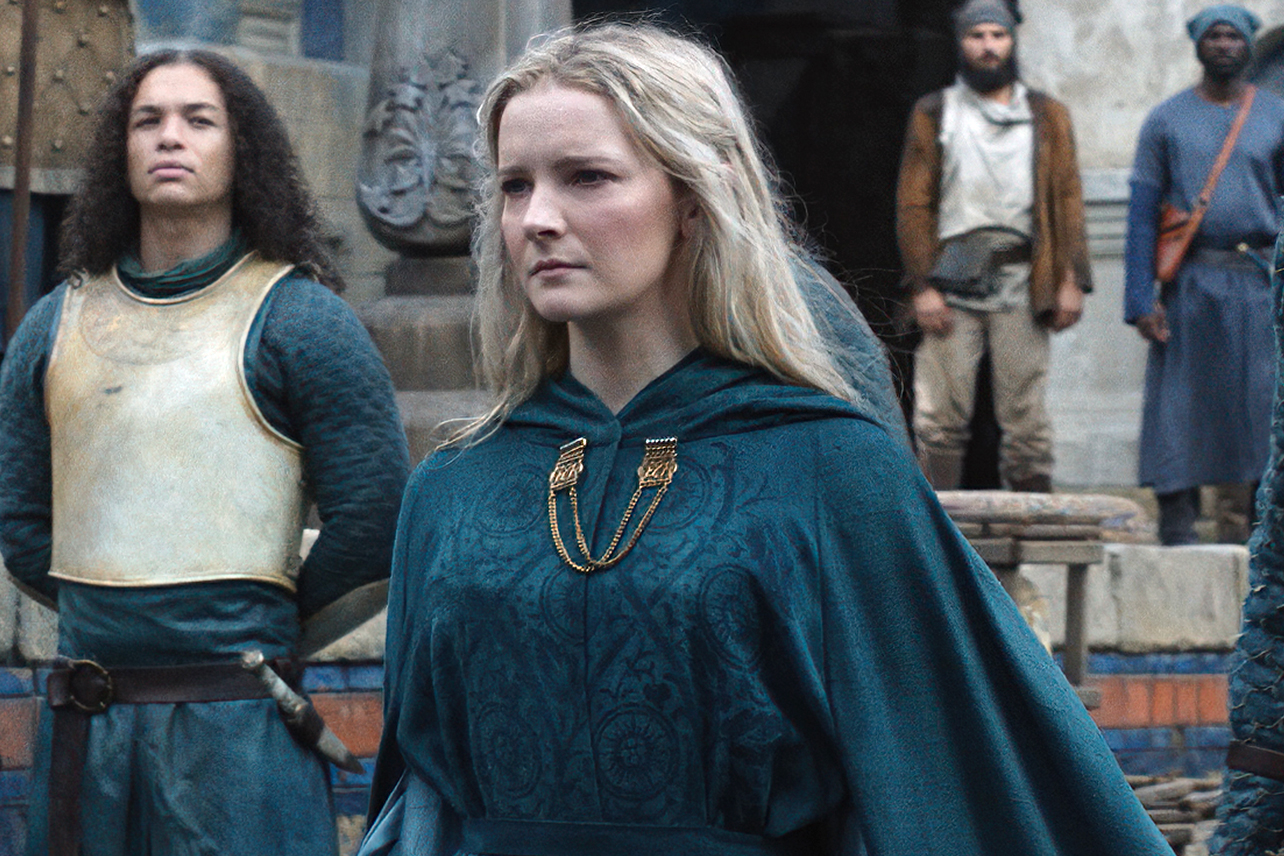 The Lord of the Rings: The Rings of Power Episode 4 “The Great Wave” on Prime Video finally revealed that, yes, the dwarves are mining Mithril and Adar is a former elf who is now leading the orcs in Sauron’s plan to conquer the Southlands. However the episode also left us with a ton of questions still officially unanswered, like who is whispering to Isildur (Maxim Baldry) and, once again, is Halbrand (Charlie Vickers) secretly Sauron?? The episode is also full of details that you might have been potentially confused about, like what are the Tears of the Valar? And what exactly is the hilt that Theo (Tyroe Muhafidin) has discovered? Is it Sauron’s sword or a gift given to his lieutenants?

This week’s episode of The Lord of the Rings actually opened with a nightmare. Queen Regent Míriel (Cynthia Addai-Robinson) dreams that a great tsunami comes to flood Númenor and destroy all that her people love. As we learn later, this isn’t just a recurring dream for the ruler. It’s a vision that she shares with Galadriel (Morfydd Clark) via a Palantir, the great creepy circular seeing stones that got little Pippin (Billy Boyd) in trouble in The Lord of the Rings: The Return of the King. It’s this vision of an oncoming apocalypse that drives Míriel first to keep Galadriel at a distance and later to join her cause against Sauron in Middle-earth.

Photo: Prime Video
THE LORD OF THE RINGS: THE RINGS OF POWER EPISODE 4 ENDING EXPLAINED: WHAT ARE THE TEARS OF THE VALAR?

We first heard about the “Tears of the Valar” in last week’s episode of The Lord of the Rings: The Rings of Power “Adar.” Queen Regent Míriel is looking at the tree while talking with Elendil (Lloyd Owen) and she mentions that “the Faithful believe when the petals of the White Tree fall, it is no idle thing, but the very tears of the Valar themselves.” As you saw, the petals of the White Tree didn’t just fall in Númenor at the end of “Episode 4,” they shed. Míriel takes this as a sign that the Valar are mad at her for not helping Galadriel so she changes her mind and joins the fight.

But who are the Valar? And what’s the big deal about the White Tree?

The Valar are basically the gods of Middle-earth and they awarded Númenor to the men who fought with the elves against Morgoth and Sauron in the First Age. The White Tree, known as Nimloth, was part of their gift. The idea is the tree is happy and healthy so long as the people of Númenor are making choices that please the Valar. When Míriel rejects Galadriel’s pleas, the Valar are dismayed. Hence why Míriel changes her mind.

You might also remember from The Lord of the Rings trilogy that Gondor also has a sacred White Tree whose livelihood reflects the health of the Kingdom of Men. We’re not sure how the show will explain this, but in Tolkien’s lore, our boy Isildur sneaks a seedling grown from Nimloth’s fruit to Middle-earth. See how it’s all connected!!!

Photo: Prime Video
IS THEO’S HILT IN THE RINGS OF POWER SECRETLY SAURON’S SWORD? ALL THE CLUES IN EPISODE 4 “THE GREAT WAVE”

We discover in this week’s episode of The Rings of Power that the orcs invading the Southlands are indeed looking for something and it’s the magical sword hilt Theo stole from a neighbor’s cellar. Towards the end of the episode, after Arondir (Ismael Cruz Córdova) saves Theo and Bronwyn (Nazanin Boniadi) from orcs and they all return to the elf tower, one of the Southlanders corners Theo. It turns out the kid stole the hilt from him. He asks Theo if he’s ever heard of Sauron and adds that the recent “starfall” means his time is near. (Someone obvious is fond of the Stranger = Sauron theory!) The older dude also adds that the hilt was a gift that Sauron gave the men loyal to Morgoth and that Theo should save his strength for what’s to come.

So we now know a few things about the hilt we didn’t before. It’s not necessarily a weapon that belonged to Sauron, but one that he gave to men in his thrall. (Kind of like the Morgul-blades the Nazgul wield in the original LotR trilogy?? Is it a Morgul-blade?!?) We also know that Adar wants this weapon for himself.

It’s all setting up a battle that will lead Adar and his orcs to the elf tower where Arondir is shacked up with the Southlanders. Expect a Helm’s Deep-esque battle in the weeks to come…

Photo: Prime Video
WHO IS WHISPERING TO ISILDUR IN THE LORD OF THE RINGS ON PRIME VIDEO?

We don’t know! But it is worth noting that Isildur is feeling the call to go to the western side of Númenor, which would be the Andustar region. Andúnië is the main port there and Isildur’s father Elendil should technically be known as the Lord of Andúnië. The Lords of Andúnië remain Faithful to the elves even as Númenor grows further from them. So it is as if Isildur is being called back to being one of the Faithful.

Though we don’t know yet is who is speaking to Isildur, it seems that they distract him long enough to get himself and his buddies kicked out of the sea force. What do these kids eventually do? Volunteer first to travel back with Galadriel to Middle-earth.

Photo: Prime Video
DID HALBRAND DO ANY MORE SAURON STUFF IN THE LORD OF THE RINGS EPISODE 4?

Oh boy, does he! While Galadriel continues to tell people he is the heir to the royal line of the Southlands — something he has not confirmed! — Halbrand continues to use his time in jail to manipulate the folks around him. Mainly Galadriel! He actually offers her some advice about her strategy in dealing with Míriel that works. That advice is to figure out what your opponent is afraid of, and rather than exploit it, trick the person into thinking they’ve mastered it.

Later, we see Halbrand offer advice to another character, Pharazôn (Trystan Gravelle.) After Galadriel escapes captivity, he tells Pharazôn that you don’t need to chase after someone when you know where they’re going. This is interesting if only because Tolkien’s The Silmarillion says that Halbrand crosses the sea willingly to Númenor, where Pharazôn holds him hostage. During this time, Halbrand is awed by Númenor and filled with jealousy for its advancements. He also cozies up to Pharazôn and becomes his closest advisor. Just saying it’s interesting to see that Halbrand is being held hostage in Númenor, a place he’s clearly dazzled by, and is offering free advice to Pharazôn.

What is going on here? Why is Halbrand just offering all this advice? What is his game? Well, he eventually gets to walk Númenor free. To do what? Who knows.

(Yes, yes, he could still wind up being a hero or a future Witch-King of Angmar, but let me have my fun.)

Impossible 8' set interrupted by invading sheep
Cryptocurrency Investment Strategy: How To Get Rich With Cryptocurrencies Reviews