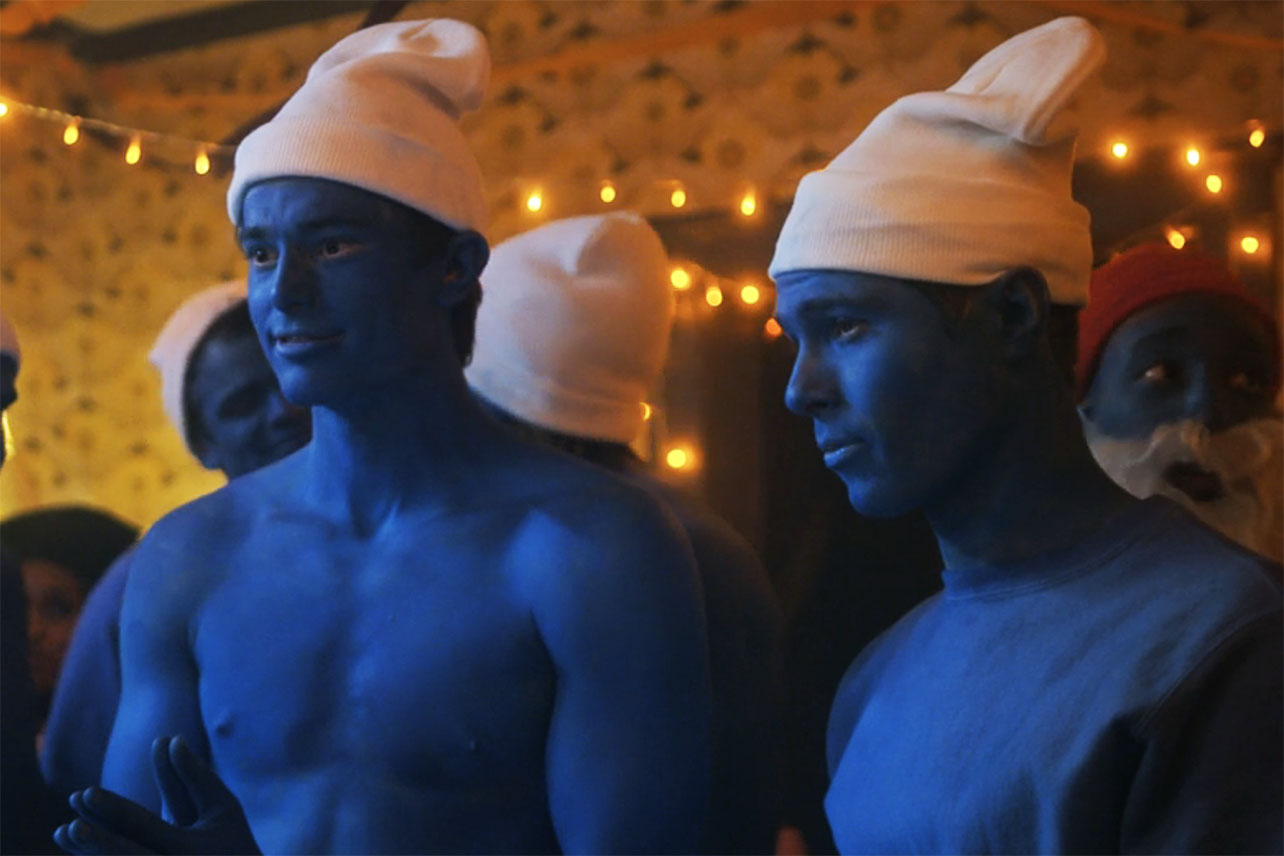 You didn’t think we were gonna get through Pretty Little Liars: Original Sin without a Halloween special, did you?! As the spookiest day of the year descends upon Millwood, the series makes its love of John Carpenter’s 1978 classic even more explicit by naming its own Halloween episode after the movie’s own tagline: “The Night He Came Home.” And come home A does, as a teen party turns deadly and sweet Mouse reveals a disturbing side of her own backstory.

Once again, the episode opens with a ‘99 flashback, as Angela’s new “friends” smash pumpkins all through suburbia. They’ve reserved their nastiest scheme of the night for her, handing her a bag of fresh dog shit to throw against their final mark’s front door. Donning a creepy pumpkin mask, Angela musters up the courage to complete the girls’ door, only to be left behind, horrified, as they pull off in their truck. And may I just say, it’s been a pleasure to see Gabriella Pizzolo show off her dramatic chops after two seasons of playing Suzie on Stranger Things. Hacking and singing “The Never-Ending Story” with Dustin is great and all, but I for one am glad someone finally got her out from behind that computer screen!

Back in the present day, Tabby is still upset with Chip for taking over as director after Greg flashed everyone. In her mind, he completely invalidated “changing the dynamics of horror in front of and behind the camera.” And honestly? Fair! He later makes things right by stepping in as their Norman Bates and allowing her to reshoot the moments she missed, but why not step in from the beginning and avoid the sketchy football player? Chip, you’re on thin ice. Tabby also gets her movie theater job back from her creepy manager, Wes, who promises to put his smarmy behavior on the background, which I can’t say I believe at all yet. Protect Tabby and the meticulously organized Letterboxd account she definitely has at all costs!

Meanwhile, we’re no closer to getting answers on the Davie/Angela front — not that Imogen isn’t trying her damndest. She’s still insistent on keeping her childhood home, even though she admits to having no more than $400 to her name. But the memory of Davie encouraging Imogen to throw a baby shower for the cash gives her an idea — why not host a Halloween rager and charge for admission and refreshments? I seriously doubt that some high school kids’ spare change will cover a mortgage, especially after Sidney revealed that Imogen’s mom died with substantial debt. But hey! The stage is set for one hell of a Halloween party.

The Liars are fully onboard with Imogen’s idea, but Mouse is preoccupied with an online proposition that gets disturbing, fast. Her face hidden by a digital mouse avatar, she makes plans to have dinner and go trick-or-treating with a much older man — while posing as his long-missing daughter, Rachel. The opening credits feature a missing poster for Mouse herself, whose birth year is inexplicably listed as 1992. And later, a series of photographs with other mysterious adults indicates that this isn’t the first time Mouse has done something like this. She tells one of her moms that she feels like she’s been paying for what happened to her as a little girl, but how long until A gets in on her risky hobby? At least she made it back safely enough to share a kiss with Ash.

Likewise, Faran finally makes a move on her “miraculously straight” ballet partner Henry, but most of her time is once again occupied with the Beasleys’ evil twin mystery. After Henry confirms that “Kelly” does in fact have a scar on her foot just like Karen would, Faran charges ahead and offers her theory to an astonished Madam Cherie. Her teacher tells her that Kelly has self-harmed in the past, deterring her for a moment — but not entirely, as she invites Kelly out for pizza on Halloween. As Kelly opens up about Karen always insisting that she live in her shadow, Faran notices the scar on Kelly’s palm from when she crushed a glass in her hand during one of the Beasley family’s fights.

Visibly moved, Faran invites Kelly to Imogen’s Halloween party, which has surpassed all expectations and has seemingly enticed the whole student body. Quickly, a costume run-down: Imogen is Rosemary from Rosemary’s Baby; Tabby is Alien’s Ripley; Noa and Shawn have gone full Addams Family as Morticia and Gomez; Faran is Poison Ivy; and Mouse is Wendy the Witch.

Since this is a teen drama/slasher, though, of course a few forces have to dampen the mood. Faran’s goodwill for Kelly evaporates when she encounters the remaining Beasley twin passionately hooking up with Greg. She finally makes her suspicions known when Kelly emerges for another drink, prompting either Karen’s greatest performance yet or a genuine breakdown from Kelly. “Why can’t I be Kelly?” she exclaims. “Why can’t I be a great dancer? Why can’t I have the hot boyfriend?” Faran warns her that the masked creep that pushed one twin could soon come after the other, but “Kelly” has heard enough. She seems sincere enough when interacting with her nearly incapacitated mother. But even if this mystery is drawn out all season, I need some more Beasley twins backstory, stat.

And don’t worry, I haven’t forgotten about A. Easily slipping through a hutch into Imogen’s basement, they’re drawn to a box containing plenty of Angela memorabilia, from her teddy bear from Margaery to that creepy pumpkin mask. Has Davie been hanging onto these keepsakes all this time, or did A plant it there during their last stakeout? Either way, it seems like something the Liars would’ve noticed by now.

Tonight, A seems most concerned with watching the girls for any bad behavior. But maybe they’re not merely driven by revenge — this is as on-the-nose as Original Sin’s Halloween references have gotten, and Michael Myers was nothing if not an equal opportunity killer. Soon enough, Tyler and his gang of football assholes get into it with the Liars when he repeatedly tries to come onto Mouse. They’re all disgusted, but Tabby is clearly connecting Tyler to whatever happened to her at that bonfire party the summer before. When he resorts to branding her an “angry Black woman” and “Feminazi,” she gives him a frankly well-deserved punch to the nose. A, who has been watching this all unfold, follows an enraged Tyler to Davie’s old bathroom, where he gets in one last homophobic slur before A strangles him to death with the shower curtain and drags his body into the night. A may be fine with murder, but they draw the line at toxic jocks!

Despite it all, the girls wake up the next morning feeling proud of Imogen’s first and probably last rager. But in the cold light of day, their recurring troubles can’t be disguised with punch bowls and Jack-O-Lanterns. Cherie tells Faran that Kelly has told her everything, and will now be dancing the role of Black Swan. And later that night, when Tabby admits that something happened to her in the woods all those months ago, Imogen ends the episode with one last blood-curdling revelation: “Something happened to me, too.”

Abby Monteil is a New York-based writer. Her work has also appeared in The Daily Beast, Insider, Them, Thrillist, Elite Daily, and others.