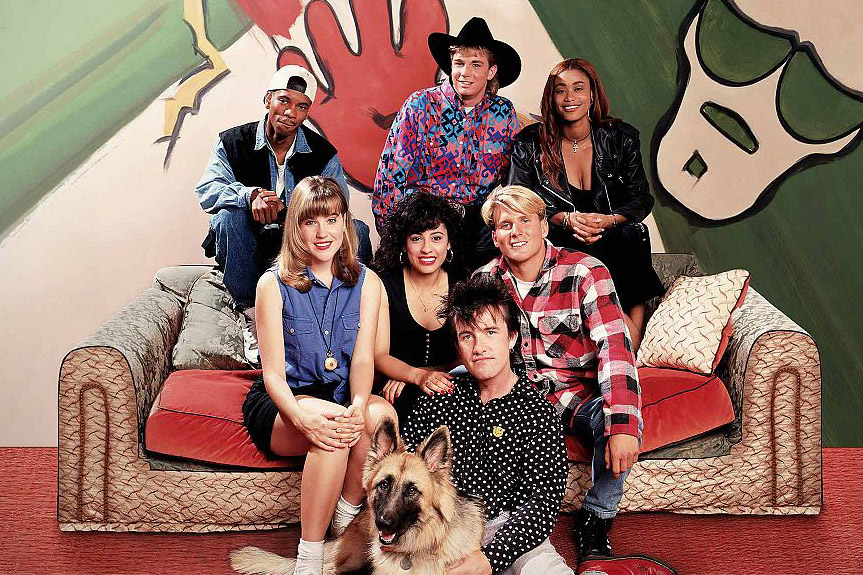 Sandwiched between the cultural reset that was New York and the iconic and oft-rerun San Francisco, the Los Angeles-based second season of The Real World is something of a middle child in the pantheon. There is no classic focal character like Julie, nor a timeless villain like Puck. The show wasn’t new anymore, but its rhythms weren’t quite set. Put simply: there was a hot tub, but the housemates weren’t fucking in it. 1993 was a transitional period.

Starting this week, (some of) the Los Angeles cast will reunite for a second season of The Real World: Homecoming, and I’ll be recapping it here. But before I do, I think it’s worth revisiting The Real World: Los Angeles, which is available for streaming— with the original music!— on Paramount+. If you remember it, it’s better and more important than you remember. And that’s a Truuuu Stow-ray.

If the cast of Real World Season 1 were the first to take part in this kind of social experiment, the Season 2 housemates were something I think is just as significant: they were the first to arrive with a clue about what they were in for. They are less awkward about where to place their cameras in interviews and more cunning about how to get the screen time they want. And it’s not just the cast who climbed that early reality-tv learning curve; the casting people carefully chose seven people who would get on each other’s nerves. They did it, and they were the first cast members to kick a housemate. (Don’t worry, we’ll get into it.)

Our original seven housemates were:

Jon, our 18-year-old Kentucky naïf, whom we meet onstage singing a cover of “Boot Scootin’ Boogie”Through his nose. If you liked season one’s Julie, but wish she wasn’t remotely interested in broadening her horizons, Jon is your boy.
Beth S. wants to be an actress, and she proves it every day by creating drama.
Dominic, a charming Irishman who regrets his participation in this show. His regret is never diminished
Aaron, this is exactly what your brain conjures up when it reads the words “Orange County fraternity bro.”
Irene, a Los Angeles policewoman who gets married about halfway through the season and doesn’t really do much else.
Tami, a singer/rapper/AIDS counselor who gets most of the interesting storylines, and…
David, a comedian (in he sense of “all the way on, all of the time”) who gets on everyone’s nerves right away.

The latter two are at the center of the show’s most famous moment, in which some initially good-natured horseplay takes a serious turn. David tries to pull a comforter off an underwear-clad Tami, who gets uneasy and later concludes that the incident WASN’T! NOT! FUNNY! I remember watching this episode in 1993 and siding with David; they were all laughing, I thought, what’s the big deal? But in 2021, you can’t miss the discomfort of the un-comfortered. You can’t help but hear Christine Blasey Ford saying “Indelible in the hippocampus is the laughter.” Knowing what we have come to know about consent, and the ways people process discomfort, it’s a rougher watch than you remember.

Much rougher is the music of Perch, the band for which David’s replacement Glenn is the lead singer. Perch is a Philadelphia native. Glenn takes Perch to Los Angeles and Perch stays in the house a lot, as Glenn didn’t keep his promise to find Perch somewhere to stay. Perch really thought The Real World was going to be their ticket to the top. Perch did not learn from the Reigndance story the right lessons.

It is clear the producers wanted Jon’s country music career to be one of the season’s main plot lines, but aside from appearing in a few talent competitions on LA’s west side, Jon doesn’t seem to have much interest in moving his country music career forward. He meets some industry people and immediately tells them he doesn’t write songs and probably never will, he gets called in to test for a movie and tells those industry people he doesn’t act and probably never will, he sleeps until noon and then lies around the house drinking Kool-Aid. He is also extremely reticent about any talk of sex, masturbation, or the fact that humans have bodies. Throughout the season, Jon looks like he’s trying to one-up Will Smith: ”Oh, you used to have so much sex that you would vomit during it? Well, if anyone says the word tampon around me, I will pass out.” Obviously the kid wasn’t going to be on mushrooms in a drum circle by the end of the season, but there is legitimately zero personal growth on display here. (Though his assessment of Perch’s sound— “Does it have to be so different?”— is right on the money.)

I wonder if I would have acted as cruelly as Aaron or Dominic all season. I hope not. They’re brutal, just openly laughing in the poor guy’s face as he sips a Hawaiian Punch and tries to find something wholesome on the TV. As the show is being taped Aaron is finishing his senior year at UCLA. Dominic is beginning a long career as a Hits Magazine editor. The two of them instantly become a solitary and inaccessible unit. It’s hard not to feel the rest of the housemates’ frustration at their cliquishness, even if you do agree that this would be a miserable house to live in. Aaron is a typical alt-righter. “change my mind” guys, and I don’t want him to be a Trump voter, but I’d bet my last dollar he is. Aaron and Dominic are a big reason later Real World casts had to work jobs together so that they wouldn’t be running off in all directions. (To no one’s surprise, Aaron and Dominic will not be back for Homecoming.)

Tami will be, and I’m glad she will, because she’s one of The Real World’s true pioneers: she’s the first cast member to go on to make a real long-term career out of reality television. She was a regular on Basketball Wives, then she and her non-baller second husband were in the cast of Marriage Boot Camp. She’s kept the shit up. (I’m aware Eric Nies, Season 1’s host, went on to host The Grind. THAT ISN’T! NOT! NOT! Tami also had The Real World’s first abortion, she is to my knowledge the only cast member ever to spend part of the season with her jaw wired shut in order to lose weight, and lest we forget, she’s a slave she’s a slave she’s a slave to your lovin’, she can’t control the fever of your kissin’ and your huggin’.

Irene’s replacement Beth A. will be back for this reunion, which is great news because she is one of reality television’s first lesbians, and also the best-adjusted person in the house by a wide margin.

The fact that Beth S. brought a cat with her to the house and Dominic brought a dog is almost too perfect. As a whole, The Real World: Los Angeles swings too far in the direction of conflict. There is a lot yelling, but very little of it feels important. It’s just argument for argument’s sake. Even when they go on an Outward Bound trip and their guides get them lost, even when they’re on a group vacation to Cozumel, even when they’re putting on a talent show, it’s near-constant bickering.

The needle drops throughout the season are perfect however “Pretend We’re Dead”Here’s a scene in Beth S.’s head where she takes pity on a headache. “Carly’s Song” by Enigma (from the Sliver soundtrack!) Aaron and Erin have a good time in the hot bathtub. “We Hate It When Our Friends Become Successful”When Jon almost gets the movie role, then “Mama I’m Coming Home”When he goes home, he will be with his mama. Sure, it’s all a little on the nose, but it’s a good reminder of the delicious gumbo that was MTV’s playlist in 1993.

Season 2 of The Real World also features some truly extraordinary 1993 fashion. These include Malcolm X baseball caps, formalSpandex, tshirts two sizes too big, and tucked into kneelength shorts. It’s got historical value, as we watch our friends get lost on the streets of Los Angeles without a nav system or a smartphone to right them. It’s got genuine emotion, as Dominic and Beth S. both deal with distant but loving parents. It’s got a dollar-drinks place called Moose McGillicuddy’s, which I would really like to find and/or revive.

It leaves me with a lot of questions. Did Kenya Barris, the man Tami met on the Fox late-night dating show Studs? What happened to Reality and the rest of her singing group? Perch did she finally give up? If so, was it because they were listening to their own music. Jon has Jon settled down and started his family, or is he wasting his endless root-beer dad energy? Is it odd that one my notes for Aaron is “very 1993 calves,”And, am I right in assuming that you can visualize that right now. Is Dominic still in America? David can still stand-up? Did Beth S. ever get a good headshot? All of these issues and many more will be addressed in The Real World Los Angeles: Homecoming. “Boot Scootin’ Boogie”To benefit from the attention, and to ascend the charts again.

Dave Holmes is an editor-at–large at Esquire.com. He is also the host of Earwolf podcast Homophilia and his book Party of One is available in stores. He also hosts the Real World podcast Truu Sowray, available wherever podcasts are available.

Crypto prices are plummeting in India as the country mulls ban on digital assets — and its creating an opportunity for savvy investors | Currency News | Financial and Business News
64 gifts for boyfriends that he will love.