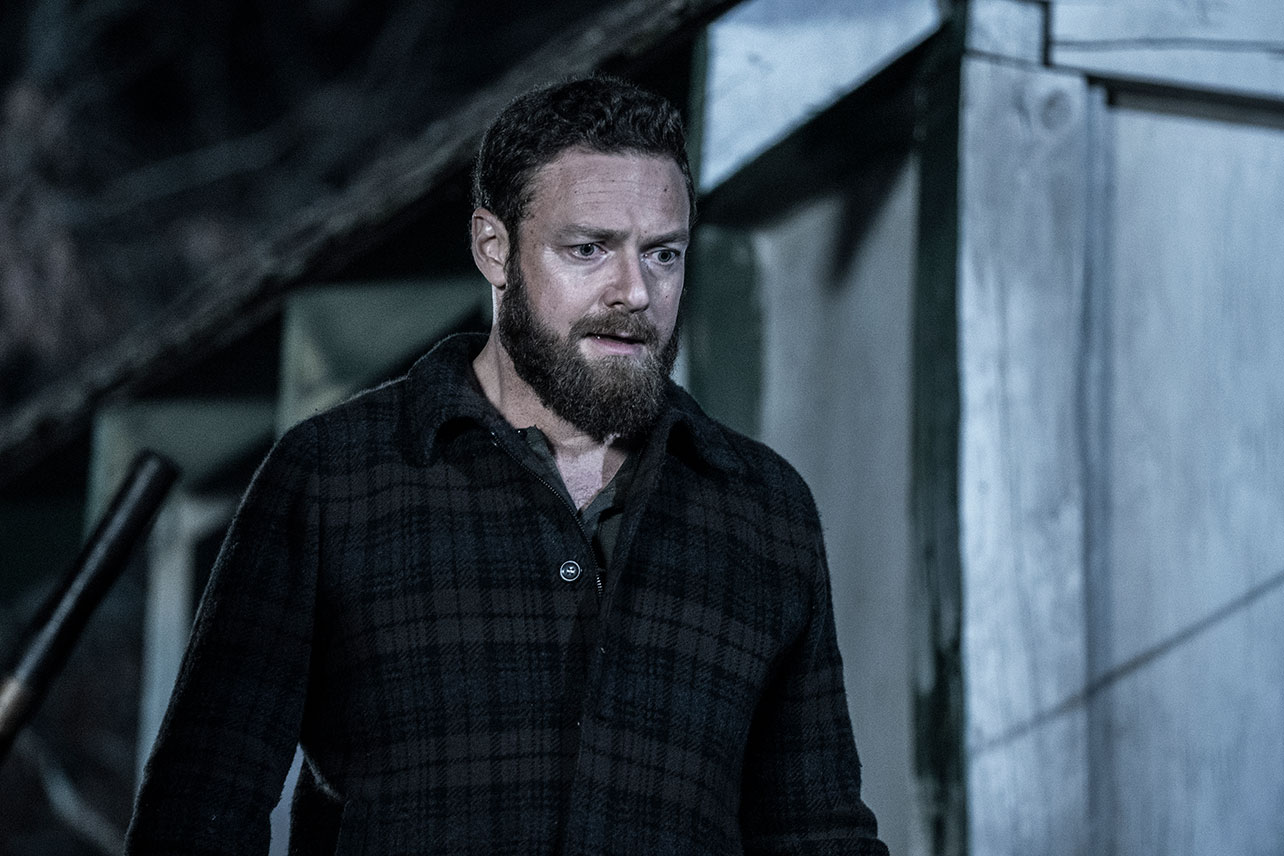 You might have been able to figure it out from the title of the episode, but on this week’s The Walking Dead, titled “Variant”, we meet… A new variant on the walkers we’ve known for 11 seasons so far. In the episode, Aaron (Ross Marquand) and company are cornered at an abandoned Renaissance Faire, and what they at first think is a Whisperer (aka, a human wearing zombie skin), turns out to be a walker who can climb and open doors.

“He’s trying to keep it together for the group, but I think he’s very worried,” Marquand told Decider on the new type of zombie. “I mean, this is a huge, huge development and I think he’s keenly aware of just how serious this could be. I don’t think he’s taking it lightly at all.”

As for how this will all pay off, TBD — it could be in the main show, or perhaps over in the Daryl Dixon spinoff which will find Norman Reedus tangling with the fast walkers introduced in The Walking Dead: World Beyond, in France. Either way, Aaron has a few more episodes to go before The Walking Dead ends… And maybe some more weirdness to deal with, too. We discussed all that with Marquand, as well as Aaron’s prospects for romance. Read on.

Decider: I wanted to jump right to the end of the episode, where we meet the variant of the title. Aaron dismisses it a little bit with his, “Oh yeah. I’ve heard stories about this.” But despite his dismissal, how big of a deal will this potentially become going forward?

Ross Marquand: He’s trying to keep it together for the group, but I think he’s very worried. I mean, this is a huge, huge development and I think he’s keenly aware of just how serious this could be. I don’t think he’s taking it lightly at all.

You, as an actor, have interacted with Walkers pretty much the same way for years on the show. What’s it like to have one climbing over things and opening doors?

It’s pretty terrifying. It kind of reminded me of when I was a kid watching Jurassic Park and seeing those velociraptors, controlling the door handles and just thinking, “My God, what a terrifying thought.” When they actually become really somewhat intelligent and are able to figure out basic motor skills and motor functions, that is a terrifying concept to grasp, and I’m just excited to see what people think of that.

And just to be clear, when Aaron takes off what he thinks is the Whisperer mask, he’s actually peeling a zombie’s face off, right?

Yeah. Which was one of the more gross things we’ve done on the show and people have already been… When we were on set, someone was asking, “Is this a reference to Red Skull?” And I was like, “No, I don’t think so.” I mean, the special effects team on our show is just, honestly, I think the best in the business. I don’t think anyone can dispute that. They literally make everything look so goddamn real that you have a hard time forgetting that it’s makeup and prosthetics.

I do love that revelation there… It’s bad enough, the idea that Whisperers maybe have chased them down and they’re still existing in this world, but it turns out it’s something actually even worse.

Exactly. Also, I just like the idea that Aaron has the strength to be able to rip off someone’s face. That’s pretty awesome.

That’s great. That’s going to be his go-to move from now on.

[Laughs] Yeah, exactly. Exactly. Instead of scalping, we just rip people’s faces off.

Jumping back though, you have this great new Renaissance Faire set. What was it like working on that?

I honestly was so tickled because I think me, Cooper [Andrews] and Cassady [McClincy] had all been there, independently, prior to filming. And I had been there I think… I don’t know, I think three years ago with a very good friend of mine. She was in town doing another project. She was working on Stargirl, and we just happened to have our schedules sync up right over the time when the fair was happening.

And it was amazing. I mean, it was just so cool to go back to a place that had been such a source of joy in real life for all three of us. And then to work on a set that is already kind of a set in its own, but without the merchandise and the regular fair people… It was a real blast. I always went to Ren Faires as a kid — and as an adult, if I’m being honest — but it was a lot of fun. I really enjoyed that set. I think that’s probably my favorite set I’ve ever worked on, on the show.

So it sounds like you’re a renaissance faire regular. What is your go-to when you go there? For me, I’ll say I always make sure to get a giant turkey leg.

You also get this really wonderful arc for Aaron. Where he’s not spying, but he’s looking on at Lydia’s relationship, cresting in a really beautiful monologue about Eric who, as he calls out, he hasn’t talked about in a really long time. What was it like playing that monologue in the midst of everything else?

I loved it. I mean, I think the show works best when we are able to pepper in moments of real human connection and pathos, because that’s the reason why we go on this journey. I would think if it was all just action and just killing zombies and wiping them out, I think it would get boring after a while and audiences would tune out. So we really have to have those moments of real character development and showing the underlying motivations for why they are the way they are. And also revealing a bit of who they were before the world ended, because that’s… At the end of the day, that’s what we’re all striving to get back to, is some version of ourselves that we once knew before the apocalypse.

I just love that monologue because it really gets to… You get to see what drove Aaron and Eric together, and that it wasn’t all rosy at first. It was actually a bit of a fight and a bit of a… It wasn’t just immediately, right off the bat, it was actually something that they had to work at. And I love that because sometimes relationships aren’t always drawn up as these easy, perfect things. And it sounds like, at least in the beginning of their relationship, they really had to work at it.

And I was glad that we got that moment to not only impress that upon Lydia, but also have that moment … between the two of them, because Aaron has not really fully trusted Lydia for many times over the years, just because she was a Whisperer herself. While he thinks she’s a good person, he’s aware that she is a wildly traumatized person and might go back to her old ways. So he’s, in this moment, really bringing her into the fold and saying, “I trust you with this. I trust you as a person. Here’s some advice. Warranted or not, it might help you.”

You can never count it out entirely, but that is the furthest thing from his mind at this point. Just staying alive and keeping Alexandria afloat is… That’s the most important thing. Everything else, honestly, protecting his daughter is his main goal, the sustainability of all these communities. But I mean, at the end of the day, that all has to be satisfied first before he’s going to allow himself to go there. Because he just… He’s got loftier ambitions right now.

Right now, Aaron’s storyline, and everything that’s going on at Commonwealth seem very separate tracks. I assume at some point we should expect them to start colliding, as we head into these final episodes?

Yeah, absolutely. While we do see these little bottle episodes where certain groups are off doing their own thing, cumulatively, we will see all the groups come together.

And logistically or thematically, what does Aaron want as we head into these final few episodes?

What he’s wanted all along, which is just stability. He’s been a man on the road for a while now and he has, for the majority of the apocalypse, known of a somewhat stability with Alexandria, even though he and Eric were always the first ones to go out and recruit, so they were often on the road. He always knew he had a home base to come back to. And I don’t think he has a home base right now. Alexandria is taken over by the Commonwealth. The Commonwealth is obviously in utter turmoil. So finding that sense of home and stability is, I think, his number one goal and focus.

We’ve got three spinoffs in the works, assuming Aaron survives, could we see him pop up on any of those, or maybe get a spinoff of his own?

I would love that. There’s a lot of if, ands, and what’s. I think if he does make it to the end, I would of course love to keep playing this guy.

Just to throw it out there, based on the romance thing, I’d love to see Aaron get a Bachelor style spinoff in the zombie apocalypse.

I’ve got a name for it. Love is Dead.

Wow. I love it. And then instead of roses, what do I give the participants?

Probably faces? The faces that he’s ripped off.

The Walking Dead airs Sundays at 9/8c on AMC, and streams a week early on AMC+.