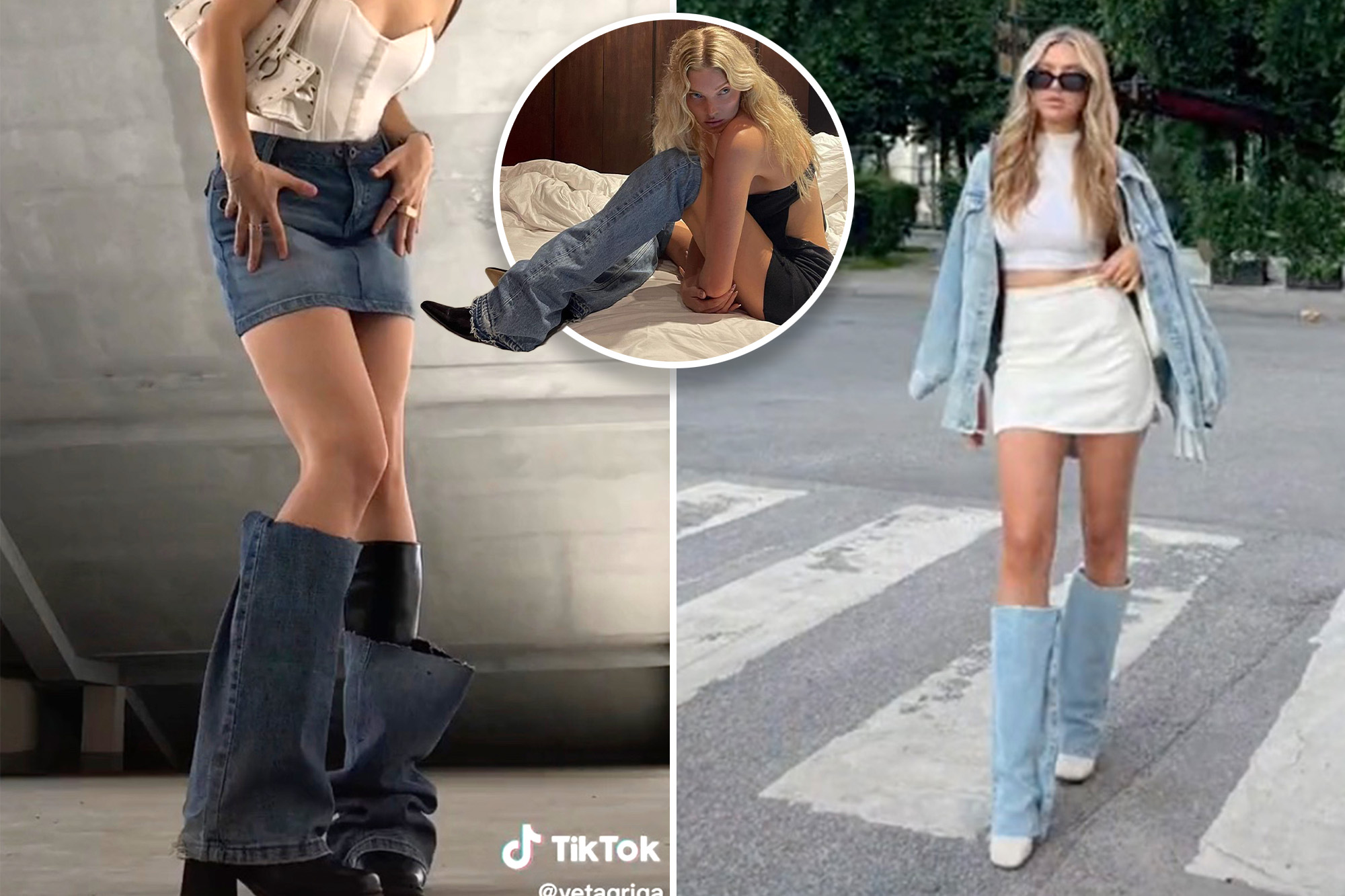 These boots were made for gawkin’.

Fashionistas are hacking up their denim and using the slashed pant legs to make “jeans boots” in a puzzling new trend.

The Frankenboots, a bizarre spin on leg-warmers but with a denim twist, have seemingly taken over TikTok where the hashtag #JeansBoots has over 1.9 million views. The Post can confirm multiple real-life sightings in Manhattan and Brooklyn, as well.

One style maven paired her campy DIY boots with a denim mini.TikTok/nellycom

One TikTokker shared a tutorial for how she copied the former Victoria’s Secret Angel’s look for less, generating over 1.6 million views and bewilderment from commenters.

The video, posted by Swedish influencer Amanda Engstrand, shows her measuring a pair of knee-high boots against her denim before cutting the pant legs off. She then carefully layers them over the boots and tucks in extra fabric on the top before strutting down the street in a micro-mini.

Commenters were amazed by the DIY getup —which one person cleverly nicknamed “joots” — with responses like “Omg slay,” “Nailed it” and “obsessed.”

Another 28-second clip posted by Gen Z fashion site Nelly.com shows a similar hack demonstration, this time marking the jeans with a ruler off before slashing the legs off. The willowy brunette then models the boot-creation with a mini denim skirt and white corset.

“Love,” one commenter declared, while another said: “Imma try that out right now.”

The DIY was done by marking up the legs of jeans, cutting and then folding over knee-high boots.TikTok/nellycom

The supermodel sported an LBD with her jeans boots.Instagram/hoskelsa

Another sartorial risk-taker showed herself similarly taking scissors to her jeans and modeling the homemade outfit with a similar tiny jean skirt.

While the head-scratching trend has taken TikTok by storm only recently since worn by Hosk in June and Fox in July, the Icelandic shoe brand Kalda first unveiled the jeans boot design last year as part of its FW21 collection.

Of course, it’s not the first time TikTok has influenced fashionistas to take a trend for a test drive. Countless shoppers have cited the platform as the culprit for opening their wallets on everything from fashion to kitchenware, using the popular catchphrase, “TikTok made me buy it.”

Last year, a $60 pink Zara slipdress was constantly sold out thanks to the hype on the ‘Tok while hordes of budget-seeking consumers are flocking to Costco hoping to score designer duds at a discount.