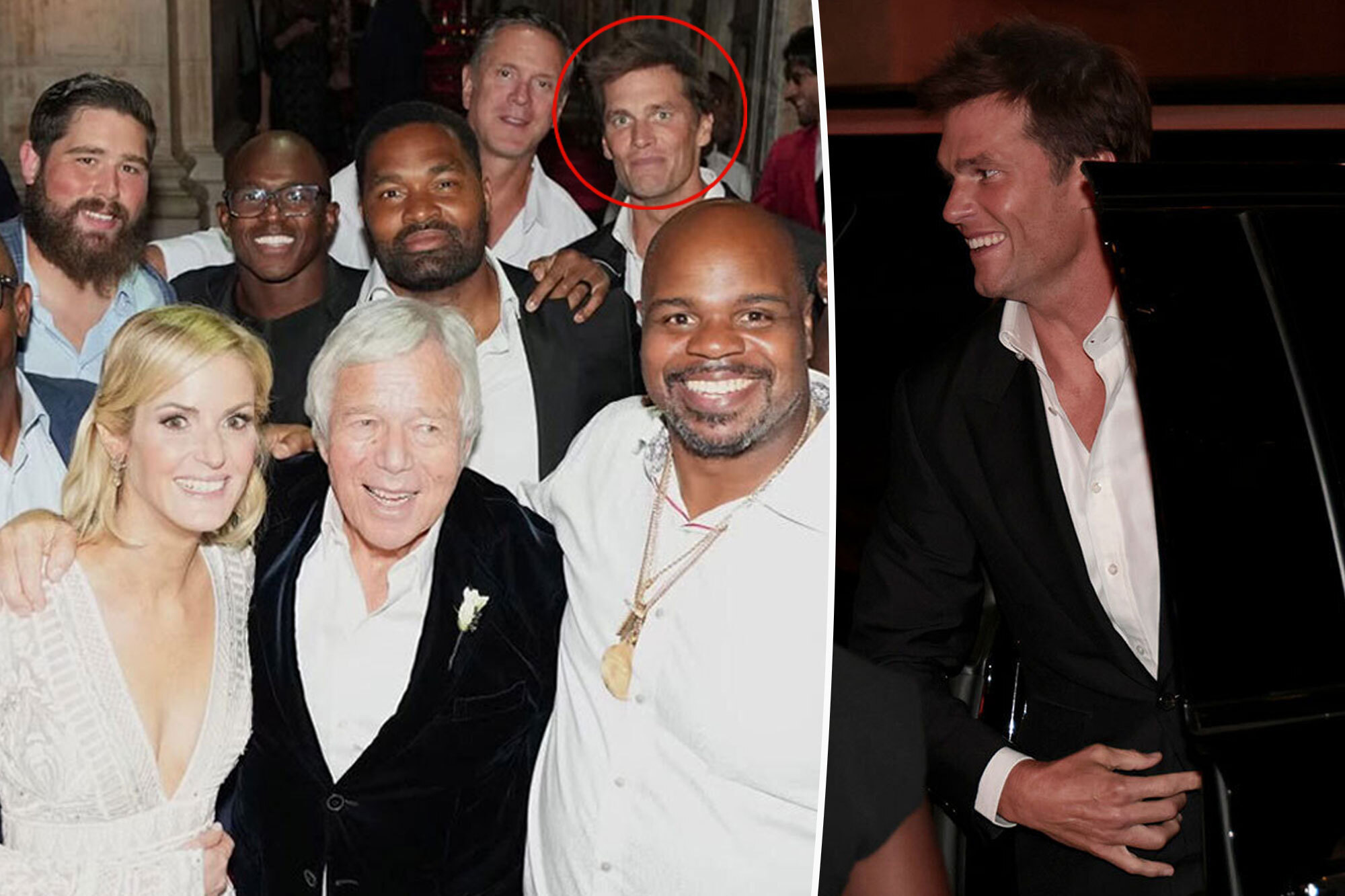 He looked to be in great spirits as he stepped out of his black SVU with a big smile on his face and was dressed to impress in a black suit, white button-down, and no tie.

“Everyone was going up to Brady,” an insider tells us.

We hear he was seen hanging with Jon Bon Jovi as well as Michael Rubin. He was also spotted schmoozing with his predecessor Patriots quarterback Drew Bledsoe, whom Brady replaced as the starter in 2001.

Brady and Kraft, 81, formed a close bond as the quarterback led the Patriots to win six Super Bowls throughout his 20 years on the team. Brady won his seventh ring at the 2021 championship game with his new team, the Tampa Bay Buccaneers.

Kraft and Blumberg posed with Brady, Vince Wilfork and other former and current Patriots players.

But the athlete’s record-breaking NFL career has been the catalyst for the crumbling of his 13-year marriage to Bündchen, whom Page Six exclusively reported is considering divorcing Brady over his choice to un-retire from football.

We broke the news last week that both Brady and the model, 42, have hired divorce attorneys.

Kraft and Blumberg tied the knot in front of a star-studded crowd at the Hall des Lumières.Getty Images

Sources first shared in September that the couple had an “epic” fight over the sports champ’s unwillingness to give up his career despite a brief retirement earlier this year.

“There’s been trouble in the marriage over his decision to un-retire. Gisele has always been the one with the kids,” one insider told us at the time, adding, “They had agreed he would retire to focus on the family, then he changed his mind.”

Sources later revealed that there is very little hope for reconciliation.

“[Gisele] is done with their marriage,” an insider told People last week. “She was upset about it for a long time, and it’s still difficult, but she feels like she needs to move on. She doesn’t believe that her marriage can be repaired.”

The source added that the former Victoria’s Secret Angel is “doing OK” and that she and Brady, who have been living separately, have not had much contact.

Brady and Bündchen have both hired divorce lawyers. gisele/Instagram

Earlier this week, Bündchen seemingly threw shade at Brady by commenting a praying-hands emoji on an Instagram post about “inconsistent” partners.

The pair share son Benjamin, 12, and daughter Vivian, 9. Brady also has a 15-year-old son, Jack, with his ex Bridget Moynahan.

The athlete and the model married in 2009 and share two kids together.gisele/Instagram

Bündchen has been candid about her objection of Brady’s constant commitment to football, sharing in a September interview with Elle, “My children and I would like [Tom] to be more present.”

She added that she has “definitely had those conversations with him over and over again.”

Brady, however, has maintained that his family and football are his priorities.

He and Bündchen married in February 2009.