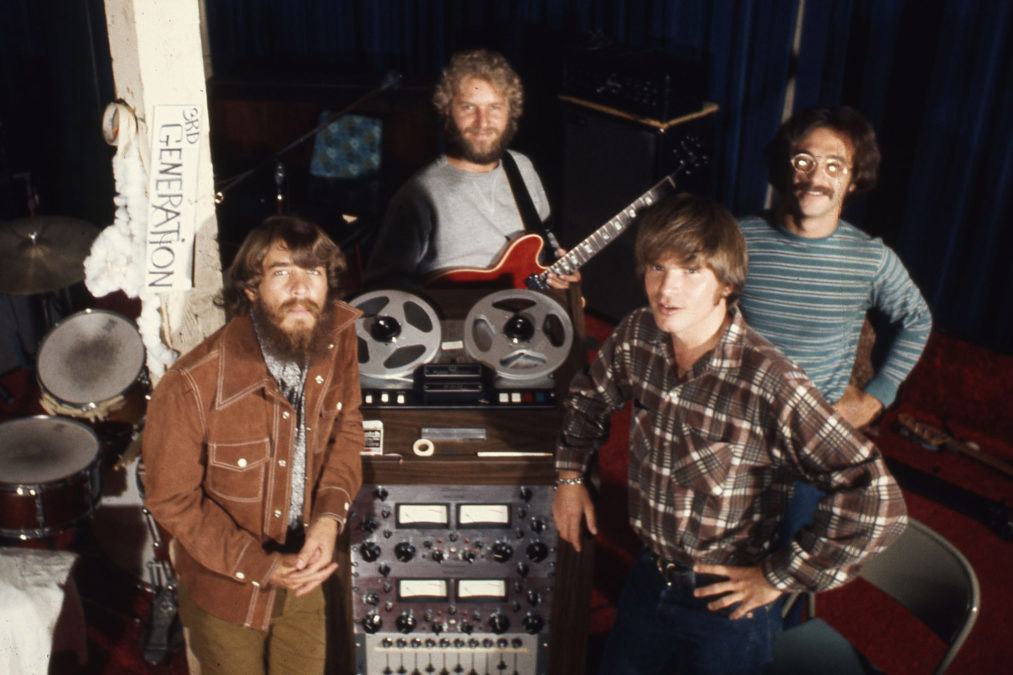 Where to Stream:
Travelin’ Band: Creedence Clearwater Revival At The Royal Albert Hall

Sometimes it seemed like Creedence Clearwater Revival could reduce the entirety of American existence – its past and present, its good and bad – down to a single three-minute song. They could sound like a ‘50s rockabilly combo, a Memphis soul revue, psychedelic San Francisco rockers, or a jug band from the previous century. Lots of other bands have tried a similar trick and failed. Creedence succeeded thanks to the simple perfection of their recordings and the songwriting of lead singer and guitarist John Fogerty, which spoke of everyday people, everyday problems and everyday joy.

As remarkable as their timeless music was their commercial success and the pace of their output. From 1968 until their breakup in 1972, they released nine top 10 singles and six platinum-selling albums in a row. Three of those albums came out in 1969, two in 1970. In April 1970, they flew to Europe for their first tour overseas. Filmed at the time but never released, the new Netflix documentary Travelin’ Band: Creedence Clearwater Revival at the Royal Albert Hall captures the proceedings, including a full performance from one of their two-sold out shows at the storied London venue.

Narrated by actor Jeff Bridges, whose folksy delivery recalls his iconic performance as Jeffrey “The Dude” Lebowski, the film’s first half mixes tour footage with a rough history of the band. Unlike the songwriting credits that led to their split, the four members are given equal screen time, which displays their different demeanors. Bassist Stu Cook and drummer Doug Clifford are wide-eyed and enthusiastic, soaking up their first trip to Europe. The Fogerty brothers, John and rhythm guitarist Tom, are reserved and deliberate with their words. When asked how he finds “the girls in Paris,” John nervously responds, “I’ve only been in my room so far. It’s just like the room in Berlin and the room in Stockholm.”

“I think this tour proves that rock ‘n’ roll music, after 15 years, somebody’s taking it seriously,” Cook says early on, a startling reminder of the genre’s brief history up to that point. By 1970, the band members had already been playing together for 11 years. They met in junior high school in 1959 in El Cerrito, California, across the Bay from San Francisco. The gestational Creedence would release records as Tommy Fogerty And The Blue Velvets as early as 1961. In the wake of the Beatles, they signed with local jazz label Fantasy Records, who rechristened them The Golliwogs, thinking it sounded more British, and probably unaware of its racist implications.

The future of the band was sidelined by the Vietnam War. After receiving their draft noticies, John enlisted in the Army Reserves and Doug in the Coast Guard. Though neither saw combat, the experience would inform songs such as “Fortunate Son,” which decries warhawks who seldom suffer the consequences of armed conflict. In footage from the tour, Fogerty sports his Army-issue field jacket, which must have turned eyes during a visit to the Berlin Wall.

Back from military service, the group rebranded itself Creedence Clearwater Revival. After two singles which featured covers of ‘50s rock n’ roll standards, John took over the creative reins and the band hit its stride with 1969’s “Proud Mary,” the start of a championship run of chart-toppers that rivaled the Beatles. Their mix of influences old and new and Fogerty’s plain spoken lyrics, which addressed the turmoil of the times without leaning too far in either direction, made them popular with blue collar workers and hippie freakers alike.

After almost 40 minutes of build up, Creedence finally hits the stage of the Royal Albert Hall with a workmanlike authority. There is no stage show, no between song banter. The four band members stand close together, as if they’re playing a local bar, not a 5,000 seat concert hall. They don’t exactly stand still, they’re certainly enjoying themselves and feeling the music, but there’s none of the flash or swagger one might expect to see at, say, a Rolling Stones concert. Besides Fogerty‘s leather pants, they look like they could’ve walked in off the street.

The songs are played much as they were recorded, but faster and hotter. It takes a few numbers for Creedence to loosen up, but after a few songs they hit their groove. John’s  vocals and lead playing take center stage, you tend to forget how good a guitarist he is, while Tom’s steady strumming provides their hypnotic pulse. As a rhythm section, Cook and Clifford are as dependable as Booker T. & The M.G.’s but aren’t afraid to lean into the material and let it rock.

“Thank you very much for having us here in London,” John says before the final song, the second time he’s addressed the audience during the course of the show. The rather staid English crowd finally jump to their feet and dance in the isles. Afterwards, we’re told, the band received a 15 minute standing ovation.

Entertaining, informative and satisfying, Travelin’ Band: Creedence Clearwater Revival at the Royal Albert Hall sees the band playing at the top of their game — but also the top of the mountaintop. Three months after returning from Europe, they would release Cosmo’s Factory, the biggest album of their career. Less than a year later, Tom Fogerty quit, feeling shut out of the creative process by his younger brother. The band soldiered on for another year but split for good in 1972. Though the acrimony around Creedence’s demise continues to this day, the film freezes them at a moment in time when they could do no wrong and the future teemed with possibility.

Benjamin H. Smith is a New York based writer, producer and musician. Follow him on Twitter:@BHSmithNYC.

Victoria Beckham flaunts her abs at the gym and more star snaps
Once you become unbreakable…yoo define your boundaries ...