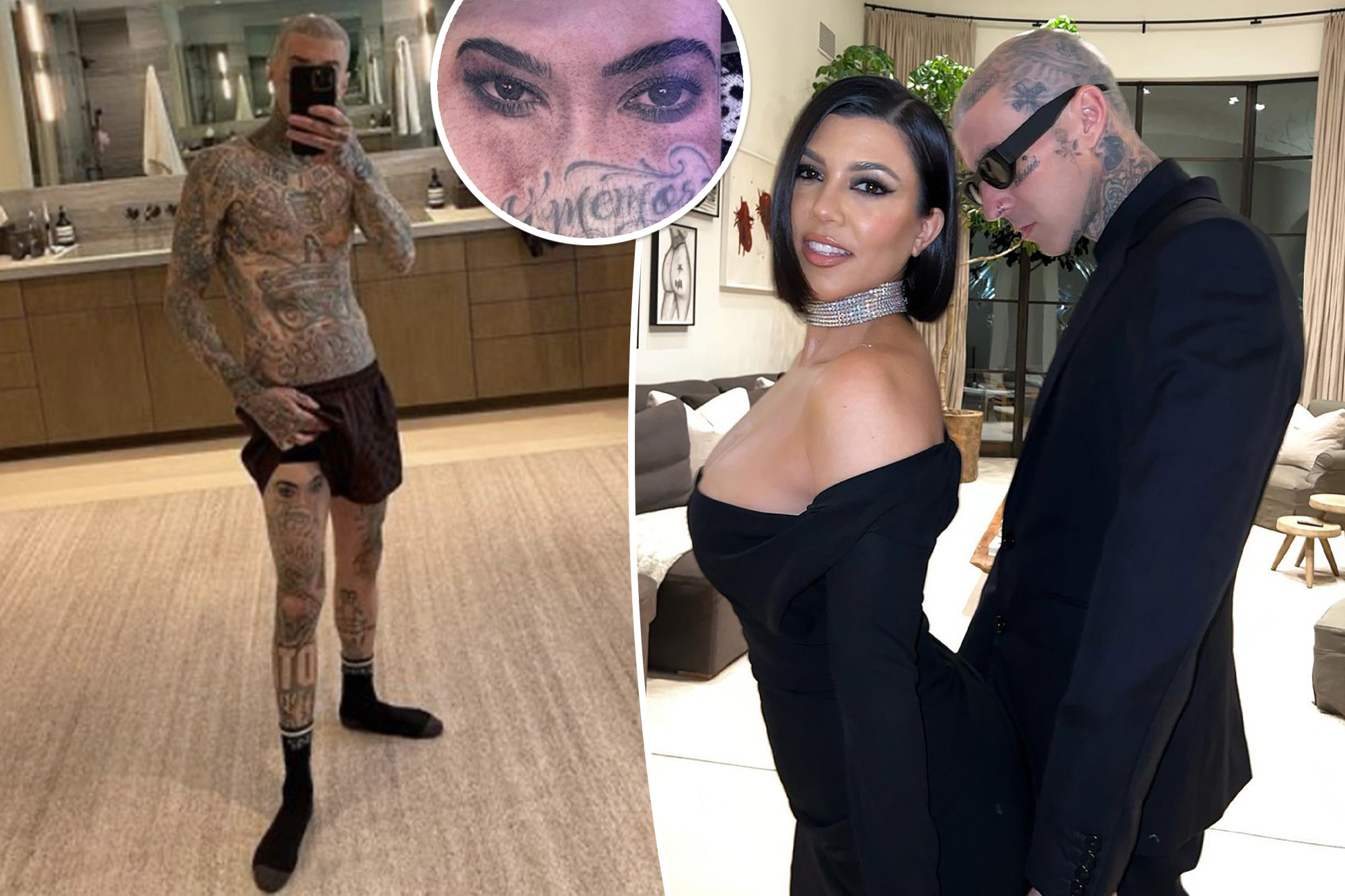 Travis Barker only has eyes for Kourtney Kardashian.

The Blink-182 drummer debuted what appears to be a massive tattoo of his wife’s eyes inked on his thigh via Instagram over the weekend.

One of the selfies featured in the carousel showed the shirtless musician lifting up his boxers to reveal the new ink.

He also posted a close-up shot of the tattoo, along with a pic taken by Kardashian, which showed him hiding behind her derrière.

The Poosh founder, 43, wore a long-sleeved shirt dress, and appeared to giggle as her husband grabbed her thighs and crouched to the ground.

Page Six has reached out to Barker’s reps for comment regarding the new ink.

Kourtney seemingly confirmed they were indeed her eyes by reposting the pic to her Instagram Story with a flirty eye emoji.

Barker dedicated his latest tattoo to the reality star.Instagram/@travisbarker

This certainly wouldn’t be the first time Barker dedicated a tattoo to his wife.

When the pair first started dating in 2021, he got Kardashian’s name inked onto his chest, followed by “I love you” on his forearm.

When asked on “Today” about her favorite piece of art on her beau’s body, the “Kardashians” star replied, “The Kourtney, of course.”

“I wrote ‘I love you’ in cursive language, and then I did it,” she added, revealing she tattooed Barker herself at the time.

Barker also has wife’s name tattooed across his chest.

The couple, who said “I do” three times in 2022, originally “wed” in a fake Las Vegas wedding in April.

Page Six exclusively confirmed at the time that the spontaneous ceremony was just for fun, as they hadn’t obtained a marriage license.

The pair’s first wedding anniversary is approaching this spring.Zuffa LLC

The pair then legally tied the knot at a Santa Barbara courthouse on May 15, 2022, with her grandmother, Mary Jo “MJ” Campbell, and Barker’s father, Randy Barker, present.

Finally, they were married in a third, lavish wedding ceremony at a castle in Portofino, Italy.

Kourtney’s children, Mason, 13, Penelope, 10, and Reign, 8, whom she shares with ex-boyfriend Scott Disick, were in attendance, along with her new stepkids.

Barker’s son Landon, 19, and daughter Alabama, 17, with ex Shanna Moakler were also on hand to celebrate, along with stepdaughter Atiana De La Hoya, 23.

‘The Last of Us’ Episode 2 Ending ExplainedDid Tess Die?
I asked my husband to clean out my fridge--and he ruined it