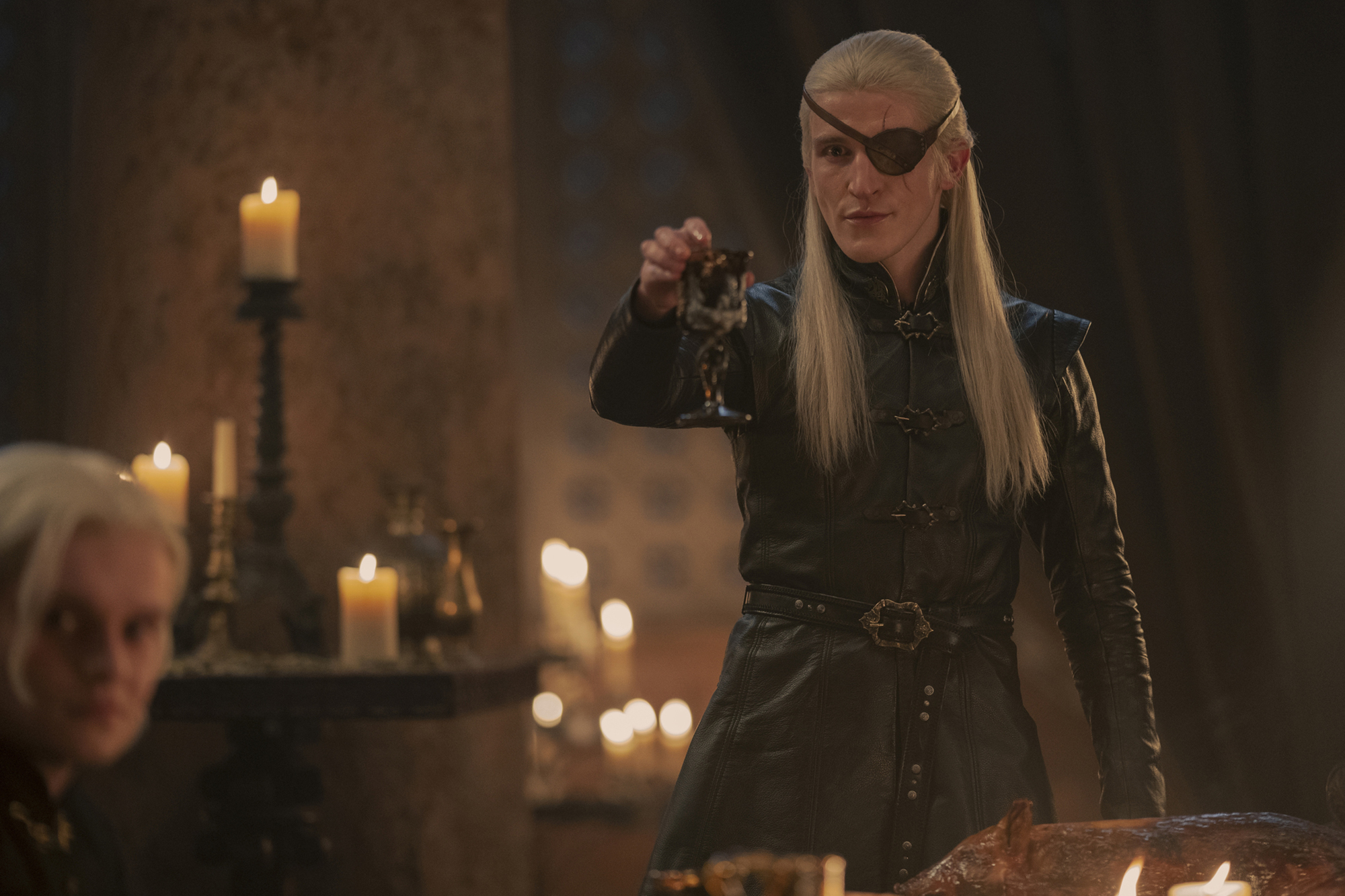 This week’s episode of the “Game of Thrones” spinoff “House of the Dragon,” features a long- awaited game-changing death, an awkward family dinner and a dramatic beheading.

Spoilers ahead for episode 8 of “House of the Dragon.”

King Viserys (Paddy Considine) is dead at last, after increasingly deteriorating each week throughout the series. This has major repercussions for the story, including the question of whether his daughter and named heir, Princess Rhaenyra (Emma D’Arcy), will actually be able to succeed him to the Throne, as planned.

The episode begins with yet another time jump. It’s now been several years since King Viserys’ brother Daemon (Matt Smith) and Rhaenyra got married at the end of last episode. They now have two sons, and she’s pregnant again.

One of her sons is named Aegon, which is a hilariously petty move (since that’s also the name of her half-brother, Alicent’s oldest son). But for some reason, the show decided to skip over giving us insight into whether it was Daemon or Rhaenyra who made this choice – or, showing how Alicent reacted to it. Apparently there’s no room for some juicy drama when we’ve got to skip over it for time jumps!

The meat of this hour involves the issue of who will rule over Driftmark, which is Corlys Velaryon’s (Steve Toussaint) seat of power. He’s been injured offscreen. Officially, it’s supposed to go to Rhaenyra’s son, who is Corlys’ grandson. But her sons’ status as bastards is an open secret, so Corlys’ brother, Vaemond Velaryon, decides to make a stink about it, claiming that he should inherit it instead.

Everyone convenes at court to get this matter settled. For Daemon and Rhaneyra, who have both been away for years, it’s an unsettling homecoming. In their absence, Alicent has traded a lot of Targaryen decor for religious imagery.

Alicent’s kids are also more grown up, traded in for older actors after this time jump. Her son Aegon (now played by Tom Glynn-Carney) assaults servant girls, and she covers up his crimes. His brother Aemond (now played by Ewan Mitchell) now wears an eye patch and is a bona fide weirdo. And Heleana (Phia Saban) is now married to her brother Aegon, in a union that doesn’t seem too happy.

A more grown up Aegon (Tom Glynn-Carney) and Aemond (Ewan Mitchell) in “House of the Dragon.” Photograph by Ollie Upton / HBO

Rhaenyra and Daemon are both shocked to see how far Viserys has deteriorated. He’s essentially half-dead now, and by the way that Daemon sniffs his cup suspiciously, it’s implied that the Hightowers have been either poisoning him, or else have been keeping him in a weakened state. Alicent and her father Otto have been acting as the proxy rulers. So, his poor health is convenient for them.

In the Throne room, Vaemond argues his case that he should inherit Driftmark rather than Rhaenyra’s son. Unfortunately for Vaemond, Viserys rouses himself out of bed in time to defend his daughter. Also, Daemon beheads him, while Aemond looks thrilled by this.

The Targaryen family dinner in “House of the Dragon.” Photograph by Ollie Upton / HBO

Later, at an uncomfortable dinner, Viserys entreats the hostile factions of his family – which are essentially Team Alicent and Team Rhaenyra – to come together. Rhaenyra and Alicent actually seem to patch things up. Naturally, Aemond ruins this, goading Rhaenyra’s sons about their true parentage, and the dinner dissolves into a fight.

By the end of the episode, Viserys finally draws his last breath. His wife Alicent is by his side, and as he mumbles about the prophecy of the “prince who was promised,” which he told Rhaenyra about earlier in the season. Alicent assumes that his final message is a beg to put her rapist son Aegon on the throne.

So at last, the King is dead. Rhaenyra is supposed to succeed him on the throne, but that’s not going to be a peaceful transfer of power, if Alicent thinks that she now has a holy mission to put her son Aegon on the throne instead. This whole story has been leading to a Targaryen civil war about who will succeed King Viserys — and now it’s game on.

Dwayne 'The Rock' Johnson has dad crowd-surf his baby on stage
Reply to when we linking fam? ...