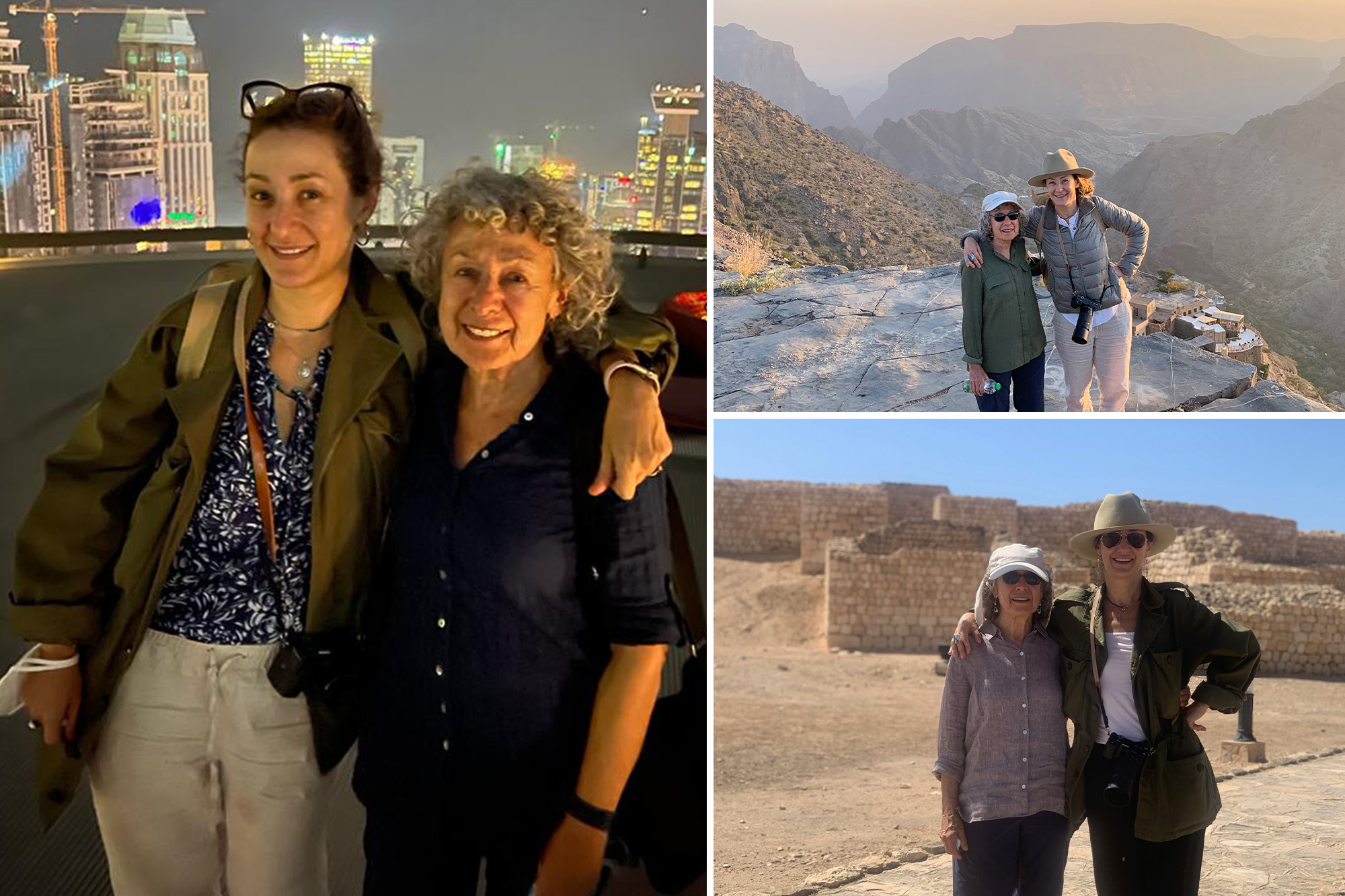 “Oh my god, we’ve got to go back — I’ve lost my passport!” My mother screamed in the cab on the way to JFK.

To be fair, it was the fourth time she’d lost her passport that morning and we hadn’t even hit the airport yet.

Two minutes later, after once again rummaging through her travel purse — a well known travel brand “designed for women” (presumably by a man who resides in the seventh circle of Dante’s hell) with many, many “multifunctional pockets”  — my mother found her passport. Again.

And I contemplated taking my emergency Valium. Again.

We were en route to my 82-year-old mother’s belated 80th-birthday present — a trip to Qatar and Oman — two years too late due to COVID.

Paula and Anne explored the ruins around Salalah, the Al Valery archeological site.

For years, my mom had said, “I’d like to travel with you” — a request that I’d put off still shaken by the last family trip my mother, sister and I took in 2000 to Greece, which was slightly disastrous… and after which my mother and I didn’t really speak for several years.

But, as my mom and I both aged and mellowed, I started to reconsider. After all, if my right wing, born again, gun toting father and I could travel together after all these years, couldn’t I try with my left wing, liberal if not slightly argumentative mom?

So, I offered her a trip to the Middle East and my adventurous mother was in… but not without some trepidation.

I’d already talked her out of buying an abaya for the trip.

“It’s not necessary, Mom,” I’d said when she called me up two weeks before the trip to announce her impending purchase.

Hiking and exploring historic sites with an 82 year old took courage (on both party’s parts).

“But Rosie said I need one!”

“Rosie from Cincinnati, Ohio, who has never been to Qatar or Oman?” I asked.

“Fine, do what you want,” I said, “but you will literally be the only woman in an abaya for miles around — you don’t even have to wear one in Saudi Arabia anymore!”

She didn’t buy one but noted that if anything went wrong “you told me not to buy it!”

“Wait? Can I keep this?” She asked when the stewardess handed her a Qatar Airways sleep suit after we boarded. “And this?” she pointed to the amenity bags.

“Yes,” the stewardess assured her as she gleefully shoved it all in her carry on.

Dinner in Qatar was one of many bonding experiences.

A little over 12 hours later, we touched down in Doha and were whisked to the Anantara Banana Island Doha. The resort is built on an old fishing island where locals used to sail to and picnic and is now comprised of water bungalows, several restaurants, sandy beaches, a wellness spa and a dive center.

We were put into a two-bedroom bungalow and promptly fell asleep for 14 hours, despite reservations for a dinner on the beach.

The next day was … just fun. Mom and I explored the island, had a leisurely lunch facing Doha, before getting Hammam massages at the spa. We made it out just in time for Mohammed the hotel manager to guide us to a boat for a sunset sail where we watched the sun slip below the horizon while sipping tea and eating fruit kebabs.

“This is wonderful, Paula,” mom said. “Thank you.”

But it was me who should have thanked her. I’d spent so much of my life being annoyed by her, or fighting with her, that I had never had the opportunity to really get to know her.. or see how similar we were. If tables had been turned, I would have bought an abaya and I definitely took the amenities bag on the plane as well as the sleep suit. Her constant chatter — Isn’t that what I did for a living — get to know people around me, ask questions and hold conversations?

The next day we hit up the absolutely stunning Jean Nouvel-designed National Museum of Qatar, built to resemble a desert rose — the sand formations that harded into flower like patterns in the desert.

That evening — our flight didn’t leave until 1 am so we had time to kill — we dined outside on top of the Helipad at the JW Marriott Marquis, the tallest building in Doha, before hitting Souq Waqif, the main traditional market in the heart of the city which dates back to the early 20th century. There, we meandered into falcon markets, into stalls where men were forging traditional sabers and outfits, stalls that sold spices, handicrafts and souvenirs, before catching our flight to Muscat, Oman, which felt like another world. Oman wasn’t open to foreigners until the 1980s when Sultan Qaboos relaxed the laws and invited the outside world in. But while Oman has oil and other mineral deposits, it isn’t as rich as its gulf neighbors — which meant that Sultan Qaboos couldn’t build a Dubai or Abu Dhabi on the ocean. Instead, Muscat and the rest of the country grew slowly — from a pearl farming country to an international haven, under strict building rules that disallowed construction over 10 stories. The result is magnificent. There is a cohesion to the country, an honoring of its past and respect for its architectural heritage not easily found elsewhere on the Arabian Peninsula.

After touching down in Muscat, we drove three hours to the Anantara Al Jabal Al Akhdar Resort in the Green Mountains, near NIzwah and the ancient Nizwah Fort.

We arrived just in time for Oman National Day, with much dancing and literal saber rattling ensuing before having dinner at the Italian restaurant, Bella Vista, overlooking the same spot where poor Princess Diana once had to sit and watch Prince Charles water color for hours while hordes of press sat close by taking photos.

The mountains of Oman were unforgettable.

Our only fight occurred after visiting the cattle market at NIzwah Fort the day, where Omanis trade, buy and barter cattle much like they have done for over six centuries. Afterwards, mom’s ankle swelled up and I said, “I think we should call off the hike we planned.”

The next day we were scheduled for the three Village Culture Walk between the untouched hamlets of Al Aqr, Al Ayn and Ash Shirayjah which are connected by the ancient falaj water irrigation system.

“Absolutely not! I am going!” she said.

“You can’t walk and your ankle is swollen… there’s no hospital nearby,” I pleaded. “If you hurt yourself, we have no recourse.”

I walked away. Thankfully the point was moot as, after elevating her leg and icing it, her ankle was miraculously cured the next day.

They visted the stunning Jean Nouvel-designed National Museum of Qatar, built to resemble a desert rose.

“My laces on my boots were too tight,” she said before taking off up a 90 degree incline to get a better view of the cliff-hanging terraced farms.

Our final stop on our journey was the Anantara Al Baleed Salalah Resort, a quick flight to the southern coast of Oman which is rumored to have been the home of the mythical Queen of Sheba — and the site of the Al Baleed Arcgeological site, the Samahram Archaeological Site and the famous Wadi Dokka — which cuts through the arid land with waterfalls and rivers and where camels, goats and other animals congregate around.

For the next few days mom and I played Indiana Jones and wandered around the ancient ruins which were once the richest cities in the world due to the frankincense trade, before heading back to the hotel to eat fresh seafood and listen to local music.

Before we knew it, we were on our way home.

I’d done it – ten days with my mother and both of us escaped alive and still talking. A week later I actually caught myself thinking, “hey, next year maybe we should do Dubrovnik?” Because, I guess I learned that the key to traveling with one’s parents is: a willingness to be wrong, remember to grasp the moments at hand, leave old hurts behind… and get separate rooms.