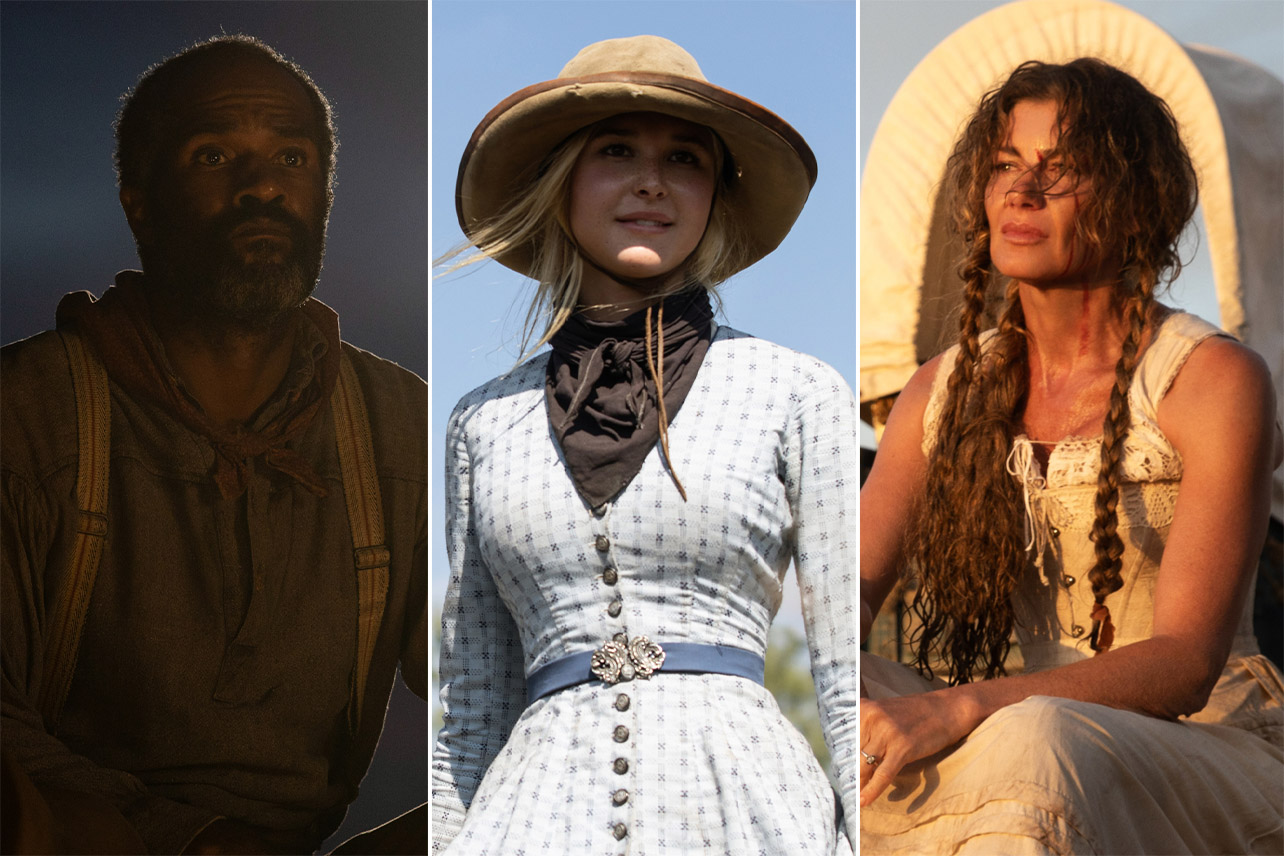 In 1883 Season 1, Episode 4, “The Crossing,”The Brazos River is the most dangerous threat to our brave pioneers. Episode 4 was written by Taylor Sheridan, and directed by Christina Voros. It begins with Elsa trading Alina (Amanda Jaros), to get a sensible pair pants. James (Tim McGraw), her father, has turned all of their gold into jewelry in order to conceal their assets on the trail. Elsa is eager to barter with the hidden treasure. Elsewhere, James, Captain Shea (Sam Elliott), Thomas (LaMonica Garrett), Wade (James Landry Hébert) and Josef (Marc Rissmann) make plans to cross the Brazos River. After some argument (“This talking back is getting contagious,”Shea states that James will carry people across River. Thomas, Shea, and Wade will transport the wagons. Wade will bring the cattle.

James decides that he will go rogue and cross the Brazos in the night, rather than in the morning with everyone else. He is shocked to see Ennis & Elsa kissing! After a heartfelt father/daughter conversation, James, Margaret (Faith Hill), and John (Audie Rick), crossed the Brazos. It was a difficult feat that proved to be more difficult than expected. Back at the camp, Shea has nightmares about his Civil War experiences, making him even more uneasy about the next day’s crossing. Nearby, Thomas (Gratiela Brancusi), and Noemi (Gratiela Brancusi), move closer to the fire, while Josef (Anna Fiamora), and Risa (Anna Fiamora), decide to bring a baby into the world. The peace they enjoy is disrupted when Shea orders them to unload their wagons, which have become clogged with heavy furniture and even a piano.

The crossing of the Brazos River is chaotic. James and Margaret assist people crossing the Brazos River by securing a leadline from one side to the other. Thomas is there to grab pioneers who drown. Unfortunately, they can’t save all of them. Many people drown, wagons are badly destroyed, belongings are destroyed, and travelers become increasingly desperate. Margaret is pulled off her horse once by a drowning settler. She is forced to fight the man to save herself. The background music to this harrowing scene is a version of Beethoven’s “Moonlight Sonata”Elsa played the piano for Wade and Ennis. The haunting melody seems symbolic of her departure from her civilized life and acceptance of the harsh wilderness surrounding her. Elsa recounts the story as she watches the group dig graves for the deceased. “No matter how much we love it, the land will never love us back.” She’s not wrong.

Let’s break down the 5 most important moments from Episode 4 that will have repercussions throughout the rest of the season.

Josef told Shea that swimming is illegal in his country when he asked Josef if he knew how to swim. He adds: “Where I’m from, they whipped the bodies of the drowned before they are buried.”Josef questions Shea about Oregon. Shea replies, “It’s worth the risk if that’s what you’re asking.”

Shea comments on Thomas when they are all alone. “It takes a lot to surprise me, Thomas. These people, they’ve never been allowed to think for themselves. They can hardly think at all. The fact that they aren’t heading to Galveston, begging their way on to a boat for home, shocks me. It shocks me that they haven’t quit yet.” Thomas replies: “I don’t know why those folks would want to go home. Home sounds like hell.”Thomas responds to Shea’s observation that the hell they know might be more than the unknown. “That’s ’cause you ain’t ever been whipped.”Shea is able to see the motivation behind this group of unprepared travelers to travel West with that exchange.

After receiving James’s permission to court Elsa, Ennis wasted no time laying on the charm. When Ennis comes across Elsa singing the parlor song, he is stunned. “Beautiful Dreamer,”He is completely captivated by his ability to induce sleep in the cattle. He gets her to continue singing while he sits next her on his horse. He kisses her in moonlight, overcome by emotion. Elsa pleads with him to stop apologizing for his forwardness. “do it again.”

James, the lovebirds, sees them kissing while he rides up to Elsa to inform her that the family is crossing over the river tonight. James tells her that she should stay with Ennis to watch the cattle, and to help them move the next day. “Herd ain’t going nowhere with you two swapping supper.”Elsa follows him as he starts to ride off and asks if he’s mad at her. James responds: “Why would I be mad? I can’t treat you like an adult when it suits me and a child when I’m worried. Your mother… it’s gonna be a different story.”It appears that Elsa has a difficult conversation ahead.

Thomas, just like he promised to, keeps watch over Noemi’s boys at their campsite. Noemi offers Thomas stew. He refuses at first, but he eventually eats it after she insists. Thomas is becoming uncomfortable as she watch him eat. “Marrying a Black man isn’t going to solve your problems, Ma’am. It’s going to create a whole bunch of new ones.” When Noemi points out that it’s a free country and the government can’t tell her who to love, Thomas sadly replies: “Your government said you can’t swim. Can’t protect yourself. Damn right, the government can tell you who to love and how to love ’em. They shouldn’t, but they can.”

When Noemi suggests they go someplace where the government can’t tell them anything, Thomas observes: “Ma’am, you don’t want nothing to do with me. I’m too old. Too set in my ways. Don’t like talking. I like sleeping outside and bathing in the river. That ain’t what a woman wants.” Noemi tells him that men have no idea what women want, and Thomas can’t argue with that. Noemi asks Thomas to watch him eat, which he does. This could be the start of a relationship between these two lonely souls.

Josef is told by Shea to tell Josef to order his people to get rid of the most heavy items from their wagons so they can cross over the Brazos faster. This is Episode 4’s most heartbreaking scene. Josef tries his best to comfort Risa. But she screams at Shea. “We will get to Oregon with nothing. How can we make our lives with nothing?”Despite their hesitation, the pioneers emptied their wagons of all their valuable possessions, leaving behind stoves, furniture, and other antiques. A musician who brought his piano with him to earn his living once they have completed the journey is the only one who doesn’t comply.

Josef and the man refuse to sacrifice the instrument, Shea says firmly: “No, he’s not a musician! And you’re not a carpenter. You are pioneers, and that’s all you are until you get there. You have no home, no job, no farm; you have the journey.”Josef realizes he is right and tries to reasone with the man who fears becoming an alcoholic. Shea is furious at his stubbornness. “These are his choices: he unloads his wagon, or he goes back to Fort Worth, or I burn his wagon to the ground. Tell him.”Josef can only hug a man while he cries. Sacrifices such as this are common along the Oregon Trail.

James, Margaret and John are about to forge Brazos at midnight. James tells Margaret he love her, adding “I just want you to know it.”Margaret responds wryly “Now I’m nervous.”James takes John with him on his horse. Margaret drives the wagon through the rush water in a stressful sequence. Margaret, exhausted, tells James. “This is harder than you said it’d be.”James replies: “I told you it was gonna take everything we had and then some.”Margaret tells him Distraught. “You should have explained what everything meant.”

Shea, Thomas, and the group meet James, Margaret, and Thomas the next morning at the Brazos river. Shea watches as he looks at the terrified people. “Let’s hope these folks stay patient. Cool heads cross rivers, hot heads will drown.”As the men fight to get the settlers across a river, there are many deaths and property destructions. Later, Margaret almost drowns herself when she’s dragged off her horse by a drowning woman and is forced to fight back. The crossing sequence ends with Margaret screaming in pain on the river bank.